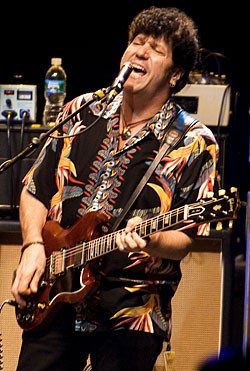 Ten years, 800 shows, and countless solo flights into the journey, Mark Karan, lead guitarist of Bob Weir and RatDog, thinks he may have found his secret to great jamming.

“When the notes are coming, I do my best to get out of the way,” he says.

Sounds simple, but this mantra for transcendent improv comes from 40 years of passionate playing and diverse listening. Raised in San Francisco in the late ’60s, Karan witnessed the pantheon of rock’s great guitarists. Having begun his career in the Bay Area, by the early ’90s he had relocated to L.A., playing with the Rembrandts, Sophie B. Hawkins, Delaney Bramlett, and Dave Mason, doing studio work, and jamming incessantly.

His career ignited when, after the passing of Jerry Garcia, the surviving members of the Grateful Dead tapped him to fill their lead slot. “For the first time, I was playing to 20,000 people,” he says. The Other Ones gig lead to Mark being chosen for RatDog, the touring group lead by Bob Weir.

“Onstage, I do everything in my power not to think. I do my work ahead of time, listen to melodies… whatever. Then, when I get on the stage I try to go by intuition as much as humanly possible, so the melodic ideas come to me pure, not contrived.”

Mark’s approach to gear is similarly pragmatic. Although his tour rig boasts an array of vintage and vintage-inspired gear that would wag the tail of any gear-hound, it’s all there to support his playing, not the other way around.

The philosophy of function also applies to vintage guitars. “I want to use them, so I buy pieces with collector ‘issues’ like non-original hardware or refinishing. If the old wood is there, we’re fine. I bought my ’51 Nocaster from Emerald City Guitars in Seattle. As we were leaving the store, I strummed it, unplugged, and my wife whipped her head around from across the room! We knew we couldn’t leave without that guitar.”

Partnering with Jay Monterose, owner of Vintique and longtime guitar tech to Danny Gatton, Mark has taken his “player” Nocaster that nobody wanted and turned it into one of his favorite touring instruments.

Mark likes “straight” guitars, too. His main guitar is ’63 Gibson SG with side-to-side Vibrola. “The Vibrola does nothing good for the tone,” Mark jokes. “But the guitar sounds and plays great! In a perfect world I’d get an SG from two or three years later with the fatter neck profile, and put a stop-bar tailpiece on it. But this does just fine.” Where he doesn’t have the originals, Karan uses aftermarket pickups from Jason Lollar, Jerry Amalfitano, and Lindy Fralin.

In the ’80s he used rack gear extensively, per the style of the time, and for better or worse witnessed first-hand the sea-change to vintage gear.

“When I moved to L.A. in ’91 there was a huge return to vintage gear,” he said. “I would go to auditions and if I rolled in a rack, I didn’t get the gig. Influenced by that scene, he went on a major vintage kick for nearly 10 years.

The current Karan setup reflects his gear history, incorporating elements from the rackmount days and the vintage era. “When I started playing with Bobby, I needed a little more of the flexibility I had with the rackmount setup, but I didn’t want to lose the tone and feel of the cool old stuff. What I’ve ended up with is extremely vintage-oriented tones and sonic approaches accessed with a fairly sophisticated switching and loop-based system.”

His current amp setup uses a Two-Rock 100-watt Custom Reverb Signature head, a Fuchs ODS-100 head, and a Blankenship 100-watt Vari-Plex head. He switches between heads, sending the dry signal to a Mojo basketweave 4×12 cab with two Tone-Tubby alnico Hempcone, and two Two-Rock/Eminence ceramic speakers. A second signal path is used for a “wet mix.” This gets routed through a Fulltone TTE tube tape delay into a small line mixer with a Lexicon PCM-90 reverb in the send/return loop. It feeds a Mesa-Boogie 290 power amp into an A. Brown 2×12 cabinet with Tone-Tubby alnico Hempcones. He has a separate rig for acoustic guitar.

Karan readily acknowledges that were he not on tour with an act as big as RatDog, he would not have the opportunity to haul around such an extensive rig. He considers himself very lucky to have that luxury. It’s not only in this sense that he considers himself lucky. After battling throat cancer last year and being recently pronounced “free and clear” he feels extremely fortunate just to be alive and out playing, more so than ever. “It’s amazing the amount of freedom I have on this gig, not to mention the amazing love and support that was shown to me while I was sick. It really is a great gig and a great musical family.”


This article originally appeared in VG‘s November 2008 issue. All copyrights are by the author and Vintage Guitar magazine. Unauthorized replication or use is strictly prohibited.
Gov’t Mule and Mark Karan – After Midnite