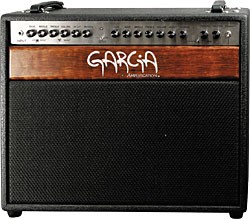 Matthew Garcia has been a guitarist for 27 years, many of them spent on the road six nights each week, 50 weeks each year.

During his time in the trenches, Garcia started that search all too familiar to veteran players like him – he wanted his amplifier to reproduce the tone that resided in his head… the perfect tone. A longtime electronics repair technician for several school districts and a musical instrument retailer, Garcia was familiar with tube amplification. Today, he designs and builds amplifiers, tube-driven distortion pedals, and speaker cabs in his own shop.

Garcia’s 60-watt 2×12″ combo has independent channels, one clean and one distortion, that can be switched on the front panel or with the included footswitch. Each channel has controls for Bass, Middle Treble, Volume, High Cut, and Reverb, and the distortion channel also has a control for Gain. And the master section has a mini-toggle switch labeled “Vintage/Modern.”

The amp produces tones using two new old stock (NOS) 12AX7 preamp tubes, four “select” new 12AX7s, an NOS 6201 in the effects loop circuit, and two Tungsol 6550s in the output section. Its chassis is made of 14-gauge stainless steel and is replete with fantastic point-to-point workmanship. Two 16-ohm 12″ Celestion Vintage 30s are wired in parallel, and the cabinet is covered in a scuff-resistant, polyurethane-based material. The engraved front panel is mahogany, finished in a high gloss. Other notable physical features include two heavy-duty handles positioned, Vox-like, at each end on top of the amp, perhaps because the Garcia may well be the heavyweight champion of combos, weighing in at 91 pounds. Such is the price for features like Hammond transformers and choke, and a 13-ply Baltic birch cabinet. Plus, the included removable casters make for easier toting.

To exercise the beast, we used an Ibanez solidbody with humbuckers and a ’70s Fender Stratocaster. Plugging in the Artist first through the amp’s clean channel, we got classic Fender blackface Twin-like clean tones that really sparkled, especially in the neck position, with fantastic low-end punch that hit like a ton of bricks, all the while retaining incredible note separation and touch response. Regardless of how hard we pushed the Volume knob, the Garcia stayed extremely clean. Even almost all the way up, it only hinted at breakup.

The Tone controls are smooth and responsive, and cover the frequencies very well, and the long three-spring reverb sounded great. The amp’s Vintage setting produced less low-end and punch, but still gave us a huge-sounding clean.

Moving to the gain channel, we got tons of gain that was smooth and warm, with tons of harmonics. The tone in this channel more closely resembles a high-gain Marshall, with a hint of Fender clean mixed in for the sake of clarity.

Again, this amp can get extremely loud, and in the distrotion channel, it’ll produce nearly enough gain and sustain to satiate the heavy-metal aficionado. We were able to push the amp’s gain until we lost control of it. Using the guitar’s volume control, we dialed in varying amounts of distortion without sacrificing tone.

Pushing the output tubes produced a more natural, less gainy British-like tone. Players who appreciate flexibility will have fun tapping the various gain structures and sweet spots – and there are many to be had.

As we dialed back the Gain, we got a fat blues breakup that hit like a fist. Insanely fat. Switching again to the Vintage setting, we got less low-end, making the amp sound like a not-as-modded high-gain Marshall; there are so many smooth, usable gain structures to be had, from crunch to insane, and all points in between.

Next, we grabbed the Strat and plugged into the clean channel. Not surprisingly, we got the cleanest, biggest Strat sound we’ve heard in a long while, with no breakup in sight. Notes popped out all over the place, with a sparkly, bouncy punch. With the Garcia’s huge reverb tones, the surf was definitely up!

Switched to the distortion channel, we were greeted again with that British-style tone with a touch of the U.S. West Coast (a.k.a. Fender) note separation. The harder we ran the Gain, the more it filled out, getting ever smoother to the point of sounding like we were playing through humbuckers.

The Garcia produces some of the cleanest, fattest “American-style” tones around, as well as true British high-gain with a touch of American clean tone. If these are the things you’ve been seeking, the Garcia may just be the perfect amp for you.