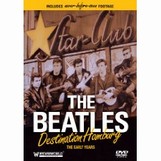 The Beatles formative years playing the sleazy clubs of Hamburg was their time in the wilderness. They honed their skills as musicians – as well as with groupies and pill-popping. When they eventually return to England, they were a polished band ready for stardom.

This British documentary tells the tale with a stiff upper lip. It blends interviews with collaborator Tony Sheridan, vintage footage and photos of Hamburg, and lackluster tracks from the period Polydor album by Sheridan and “The Beat Brothers.” The feel, sadly, is stiltingly academic, as if this is a required lecture for Rock and Roll 101.

The package also promises “Never before seen footage,” but unfortunately this is not of the Beatles. And as the small print on the back warns, “This program contains no Beatles music.”

This article originally appeared in VG‘s June. ’08 issue. All copyrights are by the author and Vintage Guitar magazine. Unauthorized replication or use is strictly prohibited.