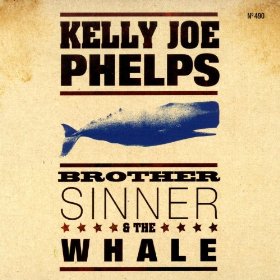 Those popular styles deﬁne the blues for some, drawing much of their character from vocal and instrumental dynamics and crescendo. The blues tradition Phelps draws from gets its character from delicate, precise ﬁgures played over a relentless clockwork rhythm – calm on the surface but with a lot more to it than at ﬁrst meets the ear.

Phelps evokes East Coast blues guitarists like Rev. Robert Wilkins in “Down To The Praying Ground.” On “Talkin’ To Jehova,” he plays just ragged enough to divert your attention from how much is actually in the mix, his acoustic slide so punchy you can almost feel the air pufﬁng out of the guitar’s soundhole every time he does a bass run.

“Goodbye To Sorrow” springs from the music of ragtime-inspired Piedmont players like Blind Blake. Phelps often marries his vocal to the ﬁngerpicked melody, a blues technique that was adapted by jazz players like George Benson. It isn’t as easy to pull off as one might think, but Phelps slips in and out of it expertly while maintaining that relentless, compelling rhythm that’s almost formal in its preciseness and all the more irresistible because of it.

You don’t have to share Phelps’ religious beliefs or hold any such beliefs at all to enjoy this album. If you feel your soul has been saved, it makes all the sense in the world to celebrate with music – and the blues in particular, which remain one of the earthly world’s greatest joys.