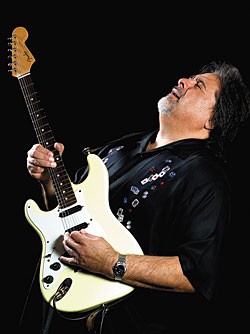 Coco Montoya’s voyage to headlining blues-rock guitarist wasn’t exactly the same road most artists of this nature have taken.

Montoya was a drummer through his teens and actually made it all the way to drumming with blues great Albert Collins. “I always thought that was my calling, but two things ended up ending my drumming career. When you have bad habits and learn only what you want to learn, there are going to be big holes in your ability… Big holes where you should have learned certain things. That and a change in pop music killed my drumming.” With a laugh, he adds, “When funk and disco became popular, I just didn’t have the skills! I can thank (former Tower of Power drummer) David Garibaldi for single-handedly ending my drumming career. I had no knowledge of how to play like that. There was no way I was going to handle that.”

As fate would have it, though, things turned out okay. Montoya’s latest record, Dirty Deal is his sixth as a band leader. He always enjoyed the guitar, even back in his drumming days. “I got an acoustic when I was 13. I was one of those kids who didn’t play baseball or football – I was always in the garage playing drums or guitar. I’d put my fingers everywhere I could to try and make some noise. I thought I invented the E chord, because I found it on the fretboard. I almost got killed walking around the house hitting that chord. I didn’t know what else to do with it!”

From that point, Montoya learned stuff from other kids. But he didn’t get into soloing until he heard Eric Clapton in Cream. Still, for awhile in the mid 1960s, it wasn’t looking like the music business held his calling. “I quit the business for awhile after Top 40 sort of passed my drumming by,” he said. “I got a day job and actually had money in my pocket. No bar owners were yelling at me. So I bartended and worked at an electronics place where I wore a tie and had a desk. It was great because I ended up going to bars at night to jam and I was just really having fun.”

By that point, Montoya was strictly a guitarist – the drums were history. And it was at one of the jams he enjoyed so much where fate took a turn when a former Clapton bandleader stopped in to jam and was impressed by his playing.

“John Mayall saw me at the old Central Club, which is now the Viper Room, and brought me back into the music business. They had these unbelievable Tuesday night jams where nobodies and superstars played together. I did a bastardized version of ‘All Your Love,’ and lo and behold, when Mick Taylor quit his band, he called and offered me the gig. I figured if I could last a few months, I’d get in the book (laughs) – I could say I was a Bluesbreaker. But I ended up staying almost 10 years.”

“We decided to just take a more bare-bones approach. We wanted to try and capture how my live efforts feel. It’s rough-edged, but that’s what we were looking for.” Montoya has known Barerre since the ’80s when the latter was spending time away from Little Feat, and playing in his own band, the Bluesbusters. Barerre brought in Little Feat buddies Kennie Gradney, Richie Hayward, and Bill Payne to help on Dirty Deal. “It was a great influence having those guys, and they’ve been really, really kind to me.” 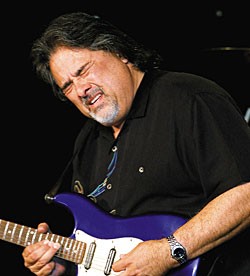 The band has since invited Montoya to its annual Feat Festival in Jamaica two years in a row.

Most pictures of Montoya feature a white offset double-cutaway guitar that has been his favorite since his days in Mayall’s band. It was made for him by Albert Molinaro of Guitars-R-Us in Hollywood and has Bill Lawrence pickups. He recently acquired two more similar guitars from L.A. Guitarworks, also with Lawrence pickups.

“I’ve always liked Bill’s pickups. The ones I have in my guitars are the L250 Humbuckers.”

Montoya has a couple of new guitars made for him by Mark Lippe. One is a 335-style guitar, the other a large-body jazz guitar Montoya used to record some of the rhythm parts on the new record. His amps include an 80-watt Carr Slant 6. “Steve (Carr) made it for me because I loved the amps, but needed something a little bigger than the 40 watt.” He runs the amp through an old open-back Bogner cab modified to 2×12″. He also employs several pedals, but really likes the Hoochie Mama made by Tim Brown. It adds what he calls “that Bluesbreaker sound.”

Montoya still very much loves to play live and will be hitting the road in support of the record. He feels blessed to have enjoyed the career he has forged in the music business. “Through my time with Albert and John, I’ve met folks like Lowell Fulson, Pee Wee Crayton, Big Joe Turner. You can’t pay for an education like that!”

In closing, he tells of a meeting with Albert King. “He was a cantankerous old man, but such a wonderful guy. He took my whiskey away one time and told me he never wanted to see me drinking before a show again. He said ‘After the show, I’ll have one with you. But don’t drink before a show.’ And he added something that’s always kind of stuck with me – ‘You gotta play!'” More than 30 years later, it’s a different instrument, but Montoya is still doing what he loves.


This article originally appeared in VG‘s April 2007 issue. All copyrights are by the author and Vintage Guitar magazine. Unauthorized replication or use is strictly prohibited.
COCO MONTOYA “Last Dirty Deal”