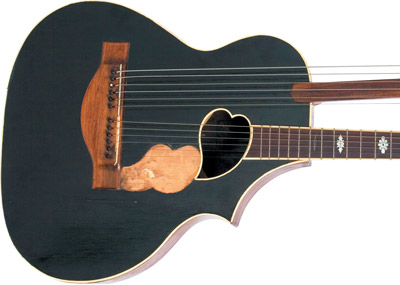 The Stathopoulo family legacy starts in 1903, when 40-year-old Greek immigrant and luthier Anastasios Stathopoulo came to New York. He established himself as a maker and importer of instruments, including Greek bouzoukis, mandolins, and even violins and cellos. A fine example of his early work is the 1907 mandolin (shown here) that was sitting on a shelf in Epiphone’s Nashville headquarters. The basic design is similar to other bowl-back mandolins of that period, but also shows off the skills of a very experienced luthier, with beautifully intricate inlay and purflings made of mother-of-pearl, abalone, and ebony, with a solid tortoiseshell bridge and inlaid pickguard.

In 1909, Anastasios (not yet a U.S. citizen) patented a “new, original and ornamental design for the Mandolin” (Pat. 40,010). Its most striking feature was the cello-style scrolled headstock with a carved animal’s head that appeared on several of his instruments. Tragically, this era ended abruptly in 1915, when Anastasios, a 52-year-old husband and father of six, died from “a long illness.”

By 1917, the newly christened “House of Stathopoulo” ushered in the second era in the history of the family’s growing musical instrument business, including the first of three banjo designs by Epi Stathopoulo, Anastasios’ eldest son and general manager. Unfortunately, little is known about this period following Anastasios’ death by way of advertising or company catalogs. A 1920 trade magazine, The Violinist, barely mentions the Stathopoulo shop on West 39th Street, despite its self-proclaimed 40 years of experience as a dealer and importer of violins. It would take several years before the Epiphone name became synomous with high-quality instruments like the Recording banjos of the 1920s and the Masterbilt archtop guitars of the ’30s.

There are no company catalogs or price lists with harp guitars, and strangely, no mention of a harp guitar in the Epiphone book. The label inside the body identifies “House of Stathopoulo, New York” as its maker, yet the harp guitar seems to lack the “quality workmanship, strength, and durability” stated on it. The missing corner of the label may have had a date, and the hand-written “No. 781” doesn’t narrow it down, since there are no serial number records prior to 1935. Although previously dated as circa 1910, it’s far more likely the harp guitar was built between 1920 and ’22, and clearly is not the work of a master craftsman like Anastasios Stathopoulo, which would have dated it to pre-1915.

The enormous two-piece rosewood back still has visible kerf marks from a lack of adequate planing and scraping. All six linear feet of the higher-grade rosewood rims are nicely formed, but not quite a match to the back. The shape of the mirrored pegheads may have inspired another Greek-American luthier, one Clarence Leonidas “Leo” Fender, but are a bit crude with more visible saw marks, indicative of a novice builder. They join each of the two necks with loose V joints that split and cracked under the strain of the strings. Scott Harrison, head of Epiphone’s R&D department, can point to several poorly repaired cracks, sloppy refinishing, and patches, extra bracing, and enough excess glue inside the body for three harp guitars. The massive rosewood bridge anchors the six strings and six sub-bass strings, but three extra holes in the peghead seems to indicate it once had a total of 15 strings. The bare spot on the top was probably the pickguard’s location, but no evidence of what type, or if it was original or added later. However, there are several design features that are distinctly Epiphone, including the mother-of-pearl fingerboard inlays of varying shapes and sizes, and the seven-piece laminated neck construction.

The heart-shaped sound hole, off-center bridge, and asymmetrical 20″ lower bout help it stand as a one-of-a-kind creation and provide a glimpse into a transitional period prior to the formation of the Epiphone Banjo Corporation. It also speaks volumes about how the Stathopoulo brothers struggled to establish an identity building new, original designs.

This harp guitar provides a link between The House of Stathopoulo and the Roy Smeck Octochorda, another unusual eight-string Hawaiian guitar that until recently had never been associated with Epiphone. Stories floating around about the origins of the octochorda credit Sam Moore, a vaudeville-era novelty instrumentalist, as being its inventor. Well, Moore may have been the first performer to use an octochorda, but a 1922 article stated it was invented by Harry Skinner of Chicago, who worked in Lyon & Healy’s violin department. Skinner also co-authored Moore’s first hit, “Laughing Rag,” with Moore on octochorda. A 1924 photo showed the vaudeville team of Moore and Freed as “…enthusiastic users of Lyon & Healy Instruments” with Moore playing their Bell Guitar.

Sometime in 1923, another talented multi-instrumentalist, Roy Smeck, met Moore while on the Orpheum and Keith vaudeville circuit, and according to Vincent Cortese, author of Roy Smeck: The Wizard of the Strings in His Life and Times, Smeck said, “Sam Moore invented the octachorda tuning” (open E7) and “[Smeck] was the only other one to play the octachorda in vaudeville.” Smeck also stated that his octochorda was one of only two made, but “[Sam’s] was a regular guitar, without the heart-shaped sound hole.” A music-trade editorial from June, 1924, supports Smeck’s claim and specifically mentions the octachorda as “the only one in its existence.” The logical conclusion is Harry Skinner’s invention was probably an eight-string version of the Lyon & Healy Bell Guitar, not an earlier version of Smeck’s octochorda. Several other accounts credit the Harmony Company with building the octochorda, and Smeck himself is mainly responsible for this story. “Roy told me Harmony built the octochorda,” said Cortese. But after seeing pictures of the House of Stathopoulo harp guitar, commented, “Now you got me scratching my head… everything happened for Roy after the Vitaphone film,” including his association with Harmony.

Vinny was, of course referring to Roy’s overnight rise to stardom after appearing in Warner Brother’s 1926 Vitaphone short film, His Pastimes. Roy was signed for $350 by Harry Warner, one of the four original Warner Brothers, to appear in what became Smeck’s chance of a lifetime. On August 6, 1926, more than a year before Warner Brothers released the first feature length-talking picture, The Jazz Singer, highbrow New Yorkers paid a whopping $10 to see the feature film Don Juan, starring John Barrymore. The prelude included a series of short talkies by renowned artists of the day like operatic singers Anna Case and Giovanni Martinelli, Ephrim Zimbalist, Sr., and the newly discovered “Wizard of the Strings,” Roy Smeck. As New Times reviewer Mordant Hall wrote the next day, “The seductive twanging of a guitar manipulated by Roy Smeck captured the audience. Every note appeared to come straight from the instrument and one almost forgot that the Vitaphone was responsible for the realistic effect.” In fact, this was no mere guitar, but the then-unknown octochorda.

In 1927, the President of Harmony, Jay Krauss, approached Roy with an endorsement deal to take advantage of the incredible success of the Vitaphone film and introduced the Vita-Uke, followed by several other designs including the six-string Vita-Guitar. Some of these “novelty” instruments had sound holes shaped like trained seals, and others had airplane-shaped “aero-bridges,” meant to capitalize on the celebrity of Charles Lindbergh. It certainly paid off, as a reported 500,000 units were sold in the first three years. The wizard had his octochorda long before Harmony came knocking. Further proof is an editorial from 1924 announcing that Smeck was signed by Paul Specht’s Alamac Orchestra for “orchestral and solo recording work” using seven instruments, including the octochorda. This was after the tour with Olga Myra and the Southland Entertainers, when Roy first met Sam Moore

Unfortunately, the octochorda disappeared circa 1930. One account says it was stolen from Smeck’s hotel room, but another explanation is his brief marriage and ensuing divorce from Olga Myra, a contortionist/dancer/violinist, who “…left me with $7 and a ukulele.”

The octochorda doesn’t appear on any Smeck recordings after 1928, and apparently vanished from the face of the earth. That is until one fateful day in 1994, when uke collector Randy Klimpert visited an antique shop and noticed a strange instrument, tagged “Circa 1890 Handcrafted: Possibly Spanish.” The shop owner offered a creative tale of his own, telling Klimpert it was “…made by slaves for their master during the Civil War.” Without knowing what it was, Klimpert bought it and after a bit of research realized it was in fact, the Roy Smeck Octochorda. In a cruel twist of fate, it happened just months after Smeck died at age 94.

Nobody knows how the octochorda wound up in an antique shop, and there are few clues regarding its life after Smeck. One exception is its appearance in the 1973 book The Steel String Guitar, by Donald Brosnac, in which it appears with the caption, “Harmony Octochorda 1929 – Photographed at the Harmony Guitar Co.” and sporting a giant carved-eagle bridge that was not on Smeck’s ’20s version. At some point, Harmony could have added the bridge and claimed the instrument as their own design, but the 1929 dating is clearly not accurate.

As it turns out, the harp guitar and octochorda were not the only two examples of these unique designs. A photo belonging to renowned harp guitarist Gregg Miner shows a similar instrument with six strings – a “sextachorda” with mother-of-pearl and abalone inlay and purfling around the body and sound hole. Though its peghead is obscured in the photo, there is a faint outline of a standard six-string slot-head configuration, and it is shown being played like a conventional six-string, not lap-style.

So, the harp guitar, Roy Smeck’s octochorda, and the sextachorda share many traits. Were they designed and built by Epi Stathopoulo himself? Perhaps, as all three share the downward-slanting cutaway that would reappear on Epiphone’s Recording Guitars of the late 1920s/early ’30s. In a sense, the octochorda’s cello-style scroll-top peghead is a fitting tribute to Anastasios Stathopoulo’s 1909 mandolin design, and brings our story full circle to when a Greek immigrant wanted to make instruments that would stand out.