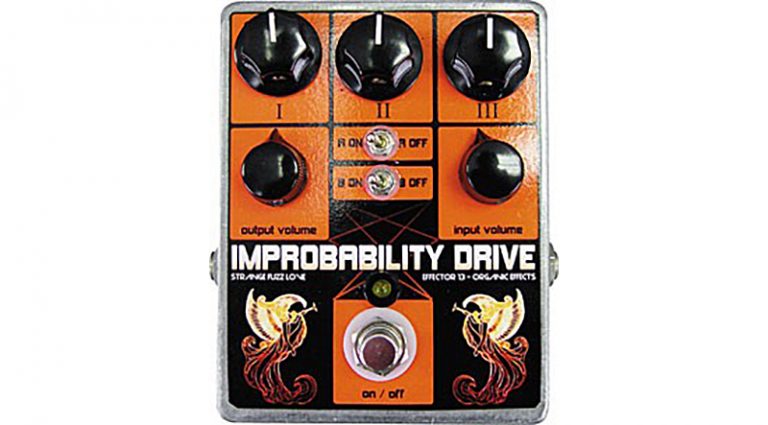 We understand how you might react. “Another drive pedal?” There are so many… a lot of them similar, or nearly identical? But then again, some are different…

Prepare, then, gearhead followers, to embark on a journey of drive, fuzz, and distortion unlike anything you’ve experienced before! Just step aboard (okay, on) the Improbability Drive by Effector 13…

Part guitar effect, part physics experiment, the Improbability Drive is the product of the active imagination of Ever Was, the 24-year-old proprietor of Effector 13, a company he founded after becoming enamored with the great fuzz players of the late ’60s through the early ’90s, everyone from Jimi Hendrix to Billy Corgan.

After earning a degree from Arlyn Studios in Austin, Texas, Was fired up the Guitar Pedal Archive website, and shortly thereafter began experimenting, building pedals from parts purchased at Radio Shack. After many hours, the Krackle Fuzz was born. That pedal would evolve to become the Truly Beautiful Disaster pedal, his first market-ready unit.

Then, feeling there was something missing in the fuzz world, Was began working on the Improbability Drive (which gets its name from The Hitch Hiker’s Guide to the Galaxy). An over-the-top, Hendrix-inspired pedal, it’s offered in the same free-spirited manner that was epitomized by Jimi. While most gear is shipped with an instruction manual/sheet, because the Improbability Drive was so new, Was’s instructions to us were handwritten in red and green marker on a piece of 81/2″ x 11″ paper.

“I suggest giving it to try out, to someone with a long coffee break who likes to experiment!” it says. “There are lots of ‘sweet spots,’ so move the knobs gently.”

“Well, we can do that,” we thought, grabbing our ’72 Fender Stratocaster with stock pickups and mid-’80s Peavey Butcher head with 2×12″ cab.

The top of the hand-wired Improbability Drive has five knobs, two mini-toggle “mode” switches, and a true-bypass on/off stompswitch. The keys to piloting the unit are in the three knobs along the top edge, labeled simply I, II, and III. A few minutes of experimentation had us hearing knob I manipulating the tone and adding a bit of boost, while II and III are gain controls. Mode switch A adds a bit of darkness to the signal. And Mode B? Well, we couldn’t tell what it was doing, so we turned back to knob I, which, when set between 0 and 9 o’clock, produced a very dark, muffled sound. After 9 o’clock it added a bit of boost/drive, and a touch more treble. The effect of control II was more obvious. Past 9 o’clock, we got very fat gain with a meaty low-midrange boost. The gain peaked at about 2 o’clock, and past 3 o’clock, it tapered off.

At 10 o’clock, control III adds the same meaty low-mid gain, peaking at 12 o’clock. Playing with controls II and III yielded a variety of gain structures with several sweet spots. With control I dialed back, we heard a muffled, ultra-smooth vintage fuzz tone. The low, meaty, midrange was prevalent throughout all settings and pickup positions. With the gains at max, single notes jumped and screamed; definite Hendrix tones, especially in the neck and middle pickup positions.

The overdrive/fuzz was notably smooth in all settings, as well. We set the input and output volumes very low, to balance with the bypass mode, then pushed the Peavey into overdrive to get a lot more gain. The pedal retained its unique, fat tone.

Pushing the input volume to full revealed the pedal’s true ability to produce gain. Simultaneously pushing the output volume to full sent our signal clean over the top, like mixing fuzz with overdrive. It was noisy, but that much gain can’t be any other way. So we backed off the input gain, and keeping the output gain to full, we got a crystalline enhanced tone, which was pure, but again somewhat noisy. Noodling with the two volumes, we dialed in a host of in-between gain/fuzz tones.

Backing off the Butcher’s gain, and pushing the input volume revealed a gritty, obnoxious – but very usable – fuzz. A person could play with this pedal for days and not tap all the possibilities. Better yet, go Gibbons on it and line up a half-dozen of them!

The Improbability Drive is the most unique drive/fuzz/distortion pedal we’ve tried. It requires time to unlock its potential. The more we played with it, the more we loved it. If your signal chain is in need of a shot of something new, the ID may be what it’s looking for.

This article originally appeared in VG‘s January 2005 issue. All copyrights are by the author and Vintage Guitar magazine. Unauthorized replication or use is strictly prohibited.