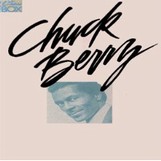 The best way to avoid people second-guessing your selections is to issue an artist’s work in its entirety. Not only are there no “glaring omissions,” there are no omissions at all.

In the case of Chuck Berry, this is definitely the right call, since, even in cases of tracks that are somewhat substandard, this is Rock (and Rock Guitar) History 101.

With 103 tracks, sequenced chronologically, spanning four discs, all the hits and classics are here (and there are dozens), from 1955’s “Maybellene” to “Brown-Eyed Handsome Man,” “Roll Over Beethoven,” “Rock And Roll Music,” “Memphis, Tennessee,” “Run Rudolph Run,” “Almost Grown,” “Back In The U.S.A.,” and more. And you can listen to his slow blues instrumentals “Deep Feeling,” “Low Feeling,” and “Blue Feeling” side by side. “Deep” features Berry on steel guitar, while “Low” is a slowed down version of “Blue,” played on standard guitar. And the 24-page booklets reveals that Hubert Sumlin is rhythm guitarist on all three as well as “School Day,” which was cut the same day.

The evolution of “Sweet Little Sixteen” is illustrated over the course of five tracks, from demo to final release, which Chess Records sped up one half-step. Whether this was to pump up the groove or make the single a tad shorter for airplay, it does succeed in making it rock out just a little bit more.

Producer Andy McKaie states that nearly all tracks were re-mastered from the original masters, with changes in EQ but no changes in the actual mixes – the barometer being “to make it sound ‘right,'” which he admits is subjective. He also points out that even going back to the original vinyl releases, singles were often mastered differently than the original LPs they appeared on. To my ears, the best-sounding versions can be found (after some searching) on the three vinyl Golden Decade double-albums. Re-EQ’ing to bring out the upright bass, for instance, is interesting but jarring, and some cuts here just seem to push the high-end too far (“Sweet Little Rock ‘n Roller,” for example).

Speaking of decades, because this set ends conveniently at 1959, some favorites that came later aren’t included, such as “Promised Land” and “Nadine.” McKaie hints that a complete ’60s box is planned, to cover the remaining Chess years, before Chuck signed to Mercury.

To quote the man himself, “Let it rock!”


This article originally appeared in VG‘s Apr ’08 issue. All copyrights are by the author and Vintage Guitar magazine. Unauthorized replication or use is strictly prohibited.

The Beatles – Rare and Unseen