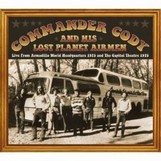 A disc of outtakes from the classic Live From Deep In the Heart of Texas makes for a fine live record on its own, especially fun to again hear a young Bill Kirchen as he makes his way through the mix of country, rock, swing, and everything in-between.

As they were wont to do, the band covers lots of classics. You hear “Blue Suede Shoes”(check Kirchen’s rockabilly chord intro into blazing single lines), “Milk Cow Blues,” “What Made Milwaukee Famous,” “Lawdy Miss Clawdy,” and lots of others, including their big hit, “Hot Rod Lincoln.” The Commander, or George Frayne, is in fine voice and state of mind throughout. It’s fun to think of what hippies thought of this on first encounter.

The second disc is a concert from 1975, and while quite good, it doesn’t have the fire or charm of the ’73 disc. Certainly, there are great songs, like “What’s the Matter Now,” “My Window Faces the South” and lots of great fiddle from Andy Stein. But, pointless obscenity shows up in songs (“Everybody’s Doing It”) and in some song introductions by Frayne. The music at times seems tired and sounds like a band going through the motions. It’s easy to see why they only lasted another year or so.

It is nice after all these years to have more Cody music. The first disc is a must-have for fans. The second, while not as strong, offers some moments. It’s all a nice reminder of how good a band this was.