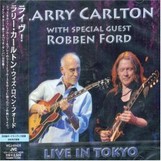 Larry Carlton and Robben Ford share a special relationship. Carlton helped the young blues-slinger learn some of his licks and techniques when he got the gig backing Joni Mitchell. As he writes in the liner notes, “He had a unique approach to playing the blues (mixing bebop notes and phrasing). Man, could that kid swing!” By the same token, Ford inspired the studio ace to get out (and get out there) and play live.

From their legendary Donte’s gigs in the mid ’70s (with Joe Sample, Pops Popwell, and Jeff Porcaro), whenever the two have gotten together, it’s been cause for celebration.

Judging by this CD, such was the case when the two played Tokyo in September 2006. As Ford writes, “I haven’t enjoyed myself this much in a long time.”

The rhythm section of drummer Toss Panos, keyboardist Jeff Babko, and bassist Travis Carlton (Larry’s son) establishes the mood with the steady-rolling groove of the opening instrumental, Ford’s “That Road.” A 335, a gold-top, two Dumbles, and a lot of soul.

The players are about as well-matched as a pair could be, and, although details aren’t given, anyone familiar with their playing will be able to tell who’s playing what. That’s Ford taking the first solo, for instance, on Carlton’s “Burnable” – invariably applying a little more bluesy sting than Carlton, whose solo on the same song is more understated dynamically but more complex harmonically.

The CD’s biggest treats are an extended workout on “Rio Samba,” the centerpiece of Carlton’s self-titled 1978 album, and the night’s only vocal offering, Ford’s take on J.B. Lenoir’s blues shuffle, “Talk To Your Daughter.” The perfect closer to an evening of all-star guitar playing.

The Who – BBC Sessions