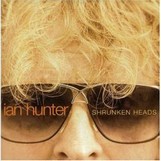 Ian Hunter’s latest is straightforward, nuts-and-bolts rock and roll. The writing is fueled by personal and real politics, and the sound of the band and Ian’s voice are perfect. Some credit must go to co-producer Andy York (the Mellencamp-band veteran), who played guitar on the disc, along with Jack Petruzzelli and James Mastro, who supply stinging leads. But most of the stinging comes from Mr. Hunter.

While Hunter manages to skewer George Bush, FEMA, and folks he sees as following blindly, he saves sharp arrows for himself, as well. “Words (Big Mouth)” is a funny poke at (and apology for) his own manners, which one can imagine have gotten him in trouble a few times. It’s especially fun to hear the “yakkety, yakkety, yakkety” chant as the song fades out and background singers, including Wilco’s Jeff Tweedy, sing about Ian’s big mouth. There’s also the wonderful “I Am What I Hated When I Was Young.” For aging babyboomers, it might hit close to home.

While those songs are self-deprecating and funny, Hunter’s attitude turns on “Soul of America” and “How’s Your House,” the latter a Hurricane Katrina protest song. And the album wraps with the piano ballad “Read ’em ‘n Weep,” where Hunter talks about various things to be read, concluding with old love letters. The song is heartbreakingly brilliant.

It’s nice that while young rockers appear confused about where to head in terms of musical direction, folks like Ian Hunter keeping blazing a path showing where rock has been, where it is, and where it should be going.