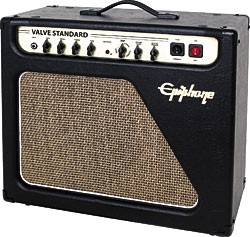 Through the years, a number of amplifier manufacturers have tried their hands at producing budget tube amps. The problem with the vast majority of these items was that they were not primarily tube amps, they were primarily low-budget amps. Their main audio function was to give the listener the distinct feeling that a knitting needle was slowly being shoved through their eardrum.

If any of these had survived – and very few did – they could have been used to great effect by military intelligence to elicit volumes of information from Al Qaeda detainees at little more than half volume. So when not one, but two inexpensively-priced amps recently showed up from Epiphone, the emergency jar of ear plugs was put on standby.

The first indication that this reaction might have been uncalled for was the fact that, upon opening the carton with the Valve Junior, we found the amp was properly shipped – upside down – to keep the tubes from falling out. In its inverted state, the Junior’s chassis could be seen, finished in a thick, vintage cream enamel. Very nice. Also, the power transformer, mounted to the bottom of the chassis to assist cooling, looked large enough to power a 30-watt amp without working up a sweat.

“Okay, let’s plug it in and get it over with,” I thought to myself. The nearest six-string victim, a recent Gibson Les Paul Junior with Rio Grande Bluesbar and Jazzbar pickups, could not escape before a George Ls cable linked it, with no mercy, to the Valve Junior. The red “On” switch was clicked and the volume knob was set at 12 o’clock.

A slight hum from the amp indicated it was ready, and an A chord was struck. 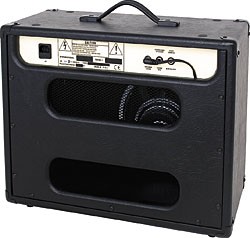 Back of the Epiphone amps.

Wait a minute… What’s this? Smooth distortion… super-clear note definition? Let me try that again. E chord. Decent low-end response. This can’t be. A quick Freddie King solo. Nice sustain on the notes. Turn up the volume, more grind. Turn it down, nice warm jazzy sounds from the neck pickup. What’s the list price? $199? They sent the wrong amp!

Next up was a newer Fender American hardtail Strat with DiMarzio Virtual Vintage pickups. The first test is the check for decent cluck in the notch 4 position. Dang! Robert Cray, get on out of town.

Where’s that other box? This one held the Valve Special, which has a 10″ speaker instead of the Junior’s 8″, and has six more knobs and two more switches on front. While the Junior gets by with just the On switch and a Volume knob (like a Fender Champ), the Special has Gain, Treble, Middle, Bass, DSP Mute, DSP dial, Reverb, Master Volume, and Standby.

The Standby is a nice touch that should increase power tube life, while the Master Volume and Gain controls allow a wider range of distortion at wider volume levels than the Junior. The three-band EQ is also useful for dealing with guitars of various tonal responses, while a separate Reverb knob allows for precise adjustment of this effect – most commonly used by vintage guitar players. Although this reverb does sound distinctly digital, it’s fairly warm and devoid of that annoying “plink” sound some have on the initial attack.

Epiphone added three common DSP modes to this amp: Delay, Chorus, and Flanger. Mounted on the same dial, it’s only possible to use one effect at a time. Each effect has a setting that clicks in rather than being continuous. The Delay has eight settings that go from over a second down to a quick echo that could be described as “hyper reverb.” The attack and treble fade out on the Delay, so it’s more like a vintage echo unit than a strictly digital delay, and it sounds fairly warm. 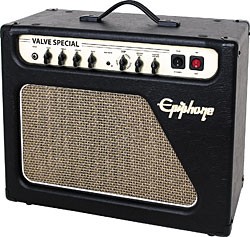 The Chorus has four settings, going from Pretenders to rotating speaker. Again, the effect is fairly warm. The Flanger also has four settings for different speeds. While all three effects do introduce some noise into the mix, the Flanger introduces the most, and was my least favorite in terms of sound quality. However, it’s there if you need it, and clicking the DSP Mute button eliminates virtually all noise.

Both amps exhibit a surprisingly good sound quality considering their prices, and the same would be true if they each cost twice as much. The Junior has about 85 percent of the sound quality of a good ’50s Champ, while the Special offers the same tones with more bass and presence, courtesy of its larger speaker and box. Compared to boutique and vintage amps, both do give up points in shimmer, bass depth, and definition, and just plain prettiness of the treble notes. But they don’t give up many points. Will these amps make you sell your point-to-point treasure? Very unlikely. But if you have a solidstate practice amp shoved under the desk in your home office, it’s time to call the recycler. Also, because of the variety of distortion levels available at low volume and their great note definition, these would both make great home recording amps. Buy one before someone in the accounting department at Epiphone comes to their senses.


This article originally appeared in VG‘s October 2005 issue. All copyrights are by the author and Vintage Guitar magazine. Unauthorized replication or use is strictly prohibited.