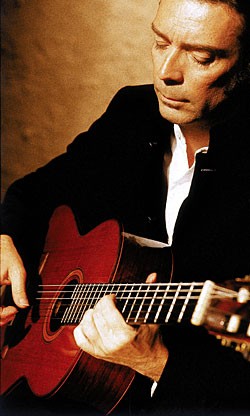 It’s been said that musicians often “follow their muse” at certain points in their careers, but Steve Hackett, who is entering his fourth decade as a professional musician, is taking the term almost literally.

His latest album, Metamorpheus (InsideOut), is a mythology-based work, and one of the central characters in its storyline is Calliope, a Muse who was the mother of Orpheus, the greatest human musician. His classical music associates on the work went by the collective name of the Underworld Orchestra, and the aggregation, which included Hackett’s brother, John, on flute, was assembled specifically for the project.

“I must’ve done every kind of music in my time,” Hackett recently told VG. “And I’ve made a point of doing that, so not everything I do is exactly like any other thing. I love all kinds of music, and I want to keep changing styles; I don’t think you should have to spend your whole life as a jazz musician or a pop/rock musician, or whatever.”

Hackett first came to notice in the early years of British progressive rock band Genesis, and has since recorded 17 albums, five of which are full-blown classical works. And he still has a collection of classic instruments, including a ’57 Gibson Les Paul goldtop and a late-’50s Les Paul Standard. Other electrics include Fernandes instruments with Sustainer pickups, which is “…like having an onboard E-Bow; you can sustain infinitely.

“I’m fond of 12-strings, as well,” he continued. “I’ve got a Tony Zemaitis 12-string; he made some wonderful guitars for all sorts of people. I just bought a Coral Sitar again; I had one in the old days, but it was stolen. It’s got a great sound. So I do still have a collection, but maybe not as many as you might think.”

Hackett has been cited as one of the relatively few guitarists who first garnered acclaim within the rock music field, and successfully went on to similar acclaim in the classical music genre. He wasn’t originally interested in such music, including classical nylon-string guitar, but gradually began to train himself to use his right hand to play more than one note at a time, he recounted. He counts on a Yairi nylon-string acoustic as his primary instrument, and noted how he uses it in composing such works as well as performing such music.

“The guitar part comes first of all, and I kind of sketch out what the orchestra’s going to do, as best I can with the guitar,” he explained. “But it’s painfully inadequate to be able to map out music that way. So you’re going to need a keyboard. I take it as far as I can on a guitar, then I usually have to work with a keyboard – and a keyboard player. We work with samples, so we can get an idea of what it’s going to sound like when the real thing is played, but all of it is written on guitar. I’m proud of the fact that maybe I’m one of the few who uses a guitar to compose orchestral stuff.”

Metamorpheus contains solo guitar segments, orchestral segments, and sections where both the guitar and orchestra are playing together. We asked Hackett how the album was recorded.

“I tried to record it in sequence,” he said. “I started with guitar, then we did the ensuing chords on a sequencer so I could have an idea when the guitar was going to come in each time. Mainly, I would record the guitar first, which was done in free time – usually not to a click (track). With this type of music, you’re allowed to bend rhythm; you’re not starting with a drum kick and it doesn’t have to ‘rock solid.’ With this particular work, when we recorded the orchestra, they had ‘clicks’ to work with. We did the soloists separately, and each member separately. We built it up layer by layer, and it took a phenomenal amount of time. But I couldn’t afford to hire a symphony orchestra, although on the last classical album, A Midsummer Night’s Dream, I’d worked with the Royal Philharmonic, and we’d recorded in the time-honored way… but they still had a click track and a conductor.

“This time, I worked with a few individuals, and I worked them to death; we recorded them individually, but they were pleased with how it turned out. They’re still talking to me, and they might work with me again!” Hackett chuckled.

Some passages on Metamorpheus are quiet and reflective, while other portions are dense and “booming.” When we cited portions that might remind non-classic-music fans of certain passages in Beethoven’s Sixth Symphony or Stravinsky’s “Firebird Suite,” Hackett noted, “I listen to a lot of orchestral stuff, including those, and it’s hard not to be influenced by them, Tchaikovsky, Rachmaninoff, Borodin, Mussorgsky – it’s wonderful music, wonderful orchestrations. Bach is wonderful, but so is Prokofiev. Russians seemed to have kind of an understanding of what it takes to make an orchestra lift off. But I’m getting acquainted with other composers all the time, like Grieg, who did a lot of folk music.”

Hackett doesn’t plan on touring with an orchestra to promote Metamorpheus, but his acoustic trio was planning on performing in Europe during the Summer of 2005, and in the U.S. in the Fall. He’s planning on doing only a couple of segments from the album, “because I don’t want to attempt to do live what is best done with an orchestra. Fortunately, I’ve done a lot of acoustic albums, so I pick and choose (material) from a lot of stuff.”

A meticulously-crafted and ambitious effort, Metamorpheus is a work any musician could be proud, but it’s only one fascinating facet of Steve Hackett’s remarkable career, which has continuously surprised and delighted guitar enthusiasts around the world.


This article originally appeared in VG‘s October 2005 issue. All copyrights are by the author and Vintage Guitar magazine. Unauthorized replication or use is strictly prohibited.