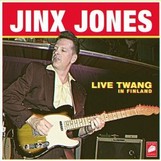 San Francisco’s Jinx Jones teams with two terrific Finnish musicians for the making of this fine live record. Henry Valanne (drums) and Ari Sjöblom (bass) are both adept at the various forms of Jones’ music, and they are many.

Primarily a rockabilly guitarist, he stays true to form here on tracks like “Double Talk Baby,” “Honey Hush,” and “Either Way I Lose.” But he mixes elements of other music, as well, with solos that delve deep into R&B and country. “I Need a Good Girl Bad” shows his jazz chops with a nice chord solo followed by octaves. “Honky Tonk Playgirl” jumps into country with chicken pickin’ that bounces out of the speakers. And then there’s surf-style instrumentals that prove the twang of rockabilly and country isn’t far removed from that form.

And in a gutsy move, the CD ends with a dazzling cover of Roy Buchanan’s masterpiece “The Messiah Will Come Again.” But Jones pulls it off with ease – and soul.

While his playing is beyond reproach, Jones has also developed into a top-flight vocalist, with loads of the attitude needed for the songs he does. He hiccups where he should, and sometimes where he shouldn’t, but it always fits. Doing R&B more, he growls with the same ferocity Brian Setzer developed over the years.

Recorded during several shows in Finland, the music gets appreciative yelps and howls of glee from the audience. After Jones’ last studio record, Rumble and Twang, this is a perfect showcase.