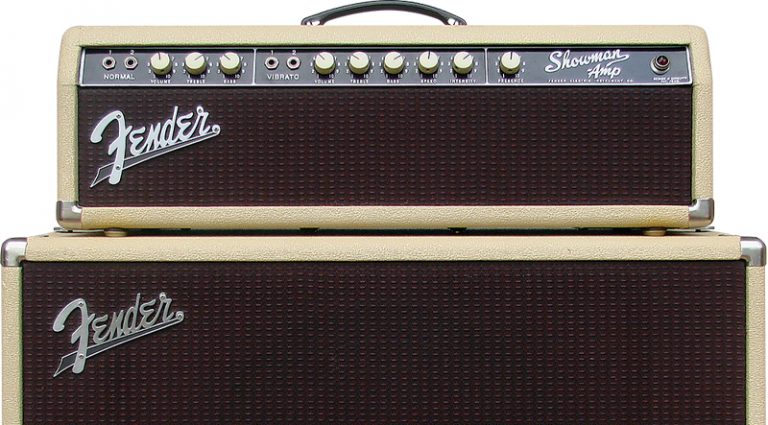 When Fender stepped up from the tweed-covered amps of the 1950s to the radically redesigned Tolex amps of the ’60s, one of the biggest leaps was in the “piggyback” head-and-cabinet sets. None better exemplified the need for a powerful, professional rig than the Showman.

The development and early evolution of the model have long been shrouded in myth, thanks in part to surf guitarist Dick Dale’s vociferous contributions to the lore and legend surrounding the R&D behind the new model.

What better way to explore the state of the seminal Showman than to probe an early – and admirably pristine – example?

Players and collectors have long talked about the Showman as “just a Twin in a separate head cabinet.” After all, both had four output tubes. But that easy summation is far from the truth. However you slice it, the progress of the Showman design through its several early iterations was all about power – making more of it, and doing so without blowing up anything.

Fender approached this as a unique and individual design challenge. Drill down a little further, therefore, and it’s no surprise that much of the effort lay in upgrading the amp’s output stage, especially its output transformer (OT). That, and the extension cabinets, and the speakers that went into them. So significant was the speaker cab, in fact, that the name of one version of the amp itself – the Dual Showman – would include a nod to the use of two speakers in the cabinet. But we’re getting ahead of ourselves. 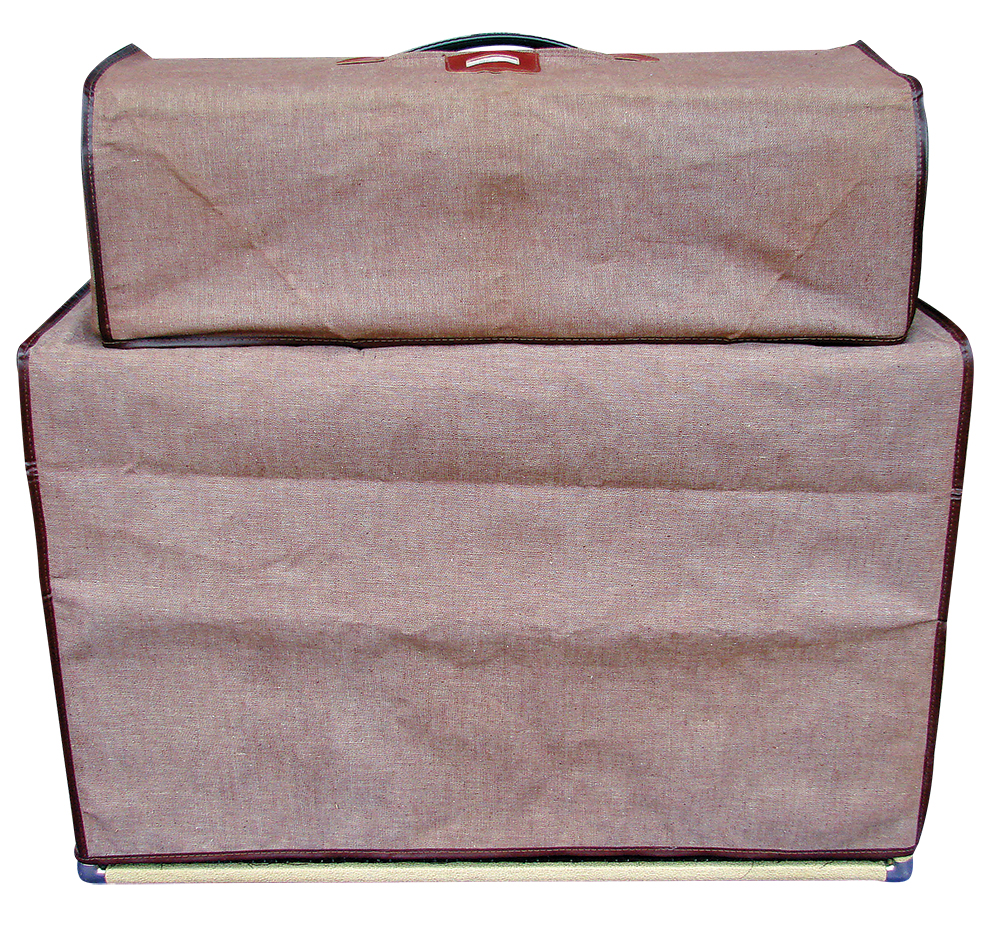 Certainly, Dick Dale wasn’t the only artist who needed a louder amplifier, but he most famously urged Leo Fender to improve existing amps in order to achieve the pounding volume required to power his shows with the Del Tones at the Rendezvous Ballroom before a few thousand screaming, stomping surf teens. Throughout its front-end, the Showman was much like other medium- and large-sized Fenders of the blond Professional Series. It had two independent channels with Volume, Treble, and Bass for each, using the new preamp configuration that sandwiched the EQ stage between two gain stages supplied by a 7025 dual-triode (a 12AX7 equivalent), rather than the single gain stage and cathode-follower EQ stage of the late-’50s tweed amps. These Tolex amps also had Fender’s complex harmonic vibrato, something close to a true pitch-shifting vibrato, and they retained the Presence control from the tweed era, both of which would disappear by mid ’63 or so.

Otherwise, the first Showman amps differed little from others in the lineup, other than in the way it was all put together. Despite having four 5881 output tubes like the Twin, they were given an OT borrowed from the brown Vibrasonic, an amp running two 6L6GCs and spec’d at around 40 watts. According to Nic Grabien, an authority on early Fender Tolex amps, and likely the world’s greatest font of knowledge on the Showman, it appears Leo Fender might have hoped to have this OT pull double-duty from the start.

“The very first blond Showman heads used the Triad 45550,” Grabien said. “That’s the 16-ohm OT spec’d for the Vibrasonic. The original spec was probably for a nominal 40 to 50 watts, but the 45550 might have been rated as high as 80. Leo certainly wanted the Vibrasonic to be robust enough to go with a four-neck Stringmaster [steel guitar], which had a very wide frequency range. The amp put out between 25 and 40 watts depending on who’s making the claim, but bigger iron would certainly have helped. For reference, call it a 35-watt. Plus, Leo did plan to use the 45550 in the Showman, as well; the design for the Showman’s output stage made for between 50 and 80 watts, but I think the original Showman 6G14s were closer to 60.”

Problems arose, however, as Dick Dale duly observed, when these early 6G14 Showmans were pushed to the max. Mated with a speaker cabinet housing a single 12″/8-ohm JBL D-120 capable of handling about 50 watts, the amp proved too much for the speakers, which frequently blew, while the impedance mismatch and effort of producing that much power proved too much for the Triad 45550 OTs, which ran too hot and, on occasion, went up in smoke.

Changes were needed, and the first of those came in the form of a new OT.

The amp on display here is a gorgeous early-’61 Showman provided by collector and VG reader Tommie James, It’s a rare transitional model that carried the new OT and represents the first Showman to have resulted from a ground-up design of the output stage, rather than (as with the earliest examples) having been cobbled together using components from existing Fender amps. This 6G14-A has a tube chart stamped “KC,” denoting March of 1961, meaning it was likely assembled from parts acquired in January or February. Further examination reveals a new component – the Triad 45945, a larger OT that could produce more power and take the heat while doing so. According to Grabien, this transformer was rated at 80 watts into an 8-ohm load and would be the OT of choice for the single-speaker Showman heads.

These amps were then partnered with upgraded JBL F-series 12″ and 15″ speakers in single-speaker cabs, which could better handle the power increase, though they still weren’t rated for the head’s maximum output. The cabs were a huge part of the Showman recipe, too, and represented further R&D by Fender. The highly acclaimed “Tone-Ring” cabinets that accompanied the first few years of Showman models involved a ported design with dual speaker baffles and a metal mounting ring that positioned the driver to direct some of the rear-driven frequencies between the staggered baffles and out the front. Essentially, it was a concept borrowed from the hi-fi world, designed to enable fuller low-end reproduction, meaning the amp itself didn’t have to work as hard to produce the bass frequencies, and could therefore produce a more-balanced representation of midrange and high frequencies along with it. These cabinets were, however, costly to make, and eventually abandoned.

Together, it all adds up to a great-sounding amp that maximizes the efficiency of its parts.

“I’ve owned a 1960 blond Fender Twin-Amp for years, and replaced its original Jensen speakers with a pair of D-120Fs,” said James. “Since the Showman 12 has an almost identical chassis except for the 8-ohm OT, I expected the 12″ JBL to sound less powerful. At the same control settings, the Showman 12’s Tone-Ring cab sounds just as loud, clean, warm, and beautiful as the Twin with its open back!”

Grabien noted that Fender chose an even larger, more powerful Triad OT in March of ’61 – the so-called “Dick Dale OT” capable of producing 100 watts into a 4-ohm load, perfect for driving the Dual Showman cabs. This transformer had noticeably thicker iron laminations to withstand strain and heat. In side-by-side comparison of his early ’61 Showman and blond ’60 Twin, James observed this part – Triad OT number 45268 – is the same.

From this point onward, the 8-ohm OTs would be found in the “single” Showman heads, while the Dual Showmans would carry the 4-ohm. In mid ’61, however, Fender commissioned new Showman transformers from Woodward-Schumacher (initially using the same specs), and both of these rare, short-lived Triad transformers were phased out. By early ’62 (maybe sooner), the early designs of both Showman models were gone, rendering both extremely rare.