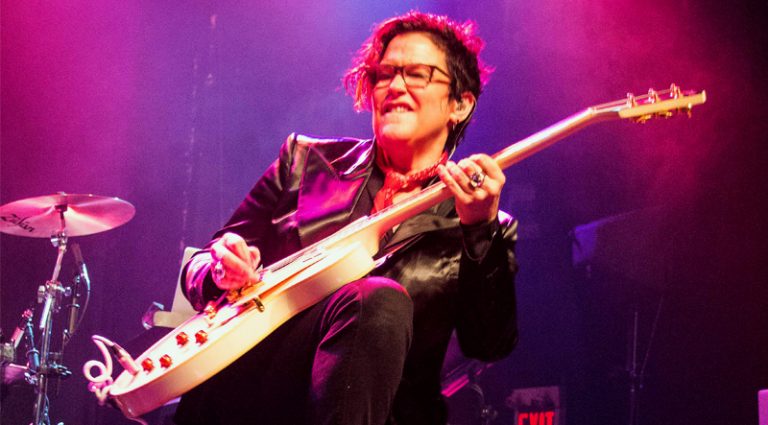 As a guitarist backing Prince on the world-dominant Purple Rain along with Parade and Around The World In A Day, Wendy Melvoin helped crystallize a musical vision known as The Revolution.

Since her time in that realm, Melvoin has been a sought-after session guitarist with a slew of high-profile credits including Seal, Glen Campbell, Sheryl Crow, and Joni Mitchell, and she’s composed music for film and TV including “Nurse Jackie,” “Heroes Reborn,” and “Shades of Blue.”

In 2017, The Revolution re-formed with original members to continue the legacy of love and unity embodied by its late founder. We spoke with Melvoin to get her story and her thoughts on the modern Revolution.

What attracted you to the guitar?

I started because I was kicked off my brother’s drums. I was six, and my folks were like, “We gotta get her an instrument.” My mother said, “Why don’t we get her a guitar.” I was like, “No!” To get me started, she took lessons with me. But after a month, I was hooked. I was in love with the instrument. I had a knack for rhythm and my mother and father used to say that the rhythms I played sounded slightly Brazilian. It was just what I was feeling.

I was one of those kids who listened to everything. My father [L.A. session pianist Mike Melvoin, part of the famed Wrecking Crew] was a member of the National Academy of Recording Arts & Sciences, so they’d send records. I was 10 years old and listening to Mahavishnu Orchestra or Miles Davis’ In A Silent Way. I’d ask my father who the guitar player was. Then I got into John McLaughlin. I started getting into rhythm players and James Brown’s band, and then it all started to culminate. 1977 until 1981 was, to me, the golden age of R&B disco – not bullsh**t disco (laughs), but Bohannon, Stargard, and the stuff Sly & Robbie were doing. I started getting into all these rhythms. I knew I was going to be a player.

Sounds like the perfect primer for a gig with Prince.

When I was 13, I went to a club in L.A. called The Starwood. I heard this song, so I ran up to the DJ and said, “What is that? Who’s that girl singing?” He said, “It’s not a girl. His name is Prince and the song is ‘Soft and Wet.’” I was completely floored and remember thinking, “That’s unbelievable.” That same night, Devo performed in the next room, so it was a memorable night.

I met Prince prior to actually playing with him. In the summer of 1982, [Revolution keyboardist] Lisa Coleman (Ed. Note: Coleman’s father is Wrecking Crew percussionist Gary L. Coleman) was in Los Angeles; our families were close and I was amazed when Lisa got the gig. I was like, “Do you even know who you’re playing with?” She said, “No, not really.”

Anyway, she invited me downtown, where they were filming videos for “Controversy” and “Sexuality.” I walked in as Prince was performing his oozing solo on “Sexuality.” He was very friendly and we hung out a lot with Lisa, but not for a minute was I about to say, “Hey, I play guitar!” By this time, the sordid love affair began with me and Lisa. I visited her at the infamous Rolling Stones concert where Prince was literally booed offstage during his set. It was right after that they flew to New York to do some gigs. I was practicing guitar in Lisa’s hotel room, and he heard me and knocked on the door. He said to Lisa, “Who was that playing? Was that you? You don’t play guitar like that?” Lisa said, “No, that’s Wendy.” He sat on the bed and said, “You didn’t tell me you played. Will you play me something?” I was sitting there thinking, “This is Prince. What am I going to play? I’m not going to play one of his songs and try to out-do him!” So I played a chord that stretched an octave and a half (laughs). He looked at me like a deer in the headlights and said, “Wow.”

Two days later, there was strife with guitarist Dez Dickerson after he didn’t go to sound check. Prince asked if I knew “Controversy.” I said, “Yeah…’” He said, “Go onstage. I’m going to go into the arena and walk around and check sound. Count the band off and play.” I did, and [drummer] Bobby Z says to this day he knew the band was complete. Prince called a few days later and asked if I’d join.

You just happened to know how to play “Controversy” at the perfect time.

The truth is that I had never played it before, but I’d watched him play that chord – F# on the second fret with the pointer finger, high E with the little finger on the B string. It’s a stretch, you can’t ring any of those other strings, and it has to be syncopated. I watched him do it so many times that I just did it. I got lucky.

There were people using that chord, but as passing tones. Prince was the first who stayed on those two notes and defined what the groove was. I thought that was mind-blowing. He played heavy strings, right through the board, with tons of compression. It was dry, tight, and you could tell the strings were really fat. It worked, and he found it.

Since reuniting with The Revolution, are there challenges other than handling lead vocals?

The big challenge is to not take it over. What we’re trying to do is say we don’t own it. Prince is Prince, with or without us. It was really important that the set be respectful and show what we miss about being in a band with him. The songs show how it was a full collaboration and we’re staying away from anything where people would say, “It’s just a tribute.” It’s a fragile position, but it’s really important that we don’t try to take ownership of him, but hold what he was for us. That’s been the most difficult thing to balance and measure against what the audience wants; let’s give the fans the feeling they got when they first heard those songs, give them a real sense of what it was like for us. Nobody is trying to replace Prince, but we want to play this stuff before we’re dead. If this ends up being a tour of boo-hoos and funerals, I won’t last and neither will the rest of the band. I can’t do funerals for the next 20 years. Whatever we can do right now, we’re trying to do it and be respectful.

Do you still have the purple Rickenbacker?

I had two of them – totally modified when we got them. At the time, I didn’t want to play any jangly Roger McGuinn guitars, so we closed the soundholes and put in G&L pickups so we could get a lot of sustain. It wasn’t really my call to get those in the first place, but Prince was keen on me playing big-body guitars. When I left the band, Lisa and I were getting ready to go on our first tour. We were at rehearsal and someone got into the back of our truck and stole my guitars. I’ve been looking for them for years, but they’re long gone.

Your image with that guitar, the outfits, and the hair are etched into the minds of so many people.

I know. It was the Zeitgeist of that moment. But I do have the white 335 from the Parade tour. That’s the one I’m using onstage now. Gibson brought it to a rehearsal for me in 1982 and it’s an absolutely spectacular instrument – built really well and I’ve been playing .012- and .013-gauge flatwounds on all my guitars for 15 years. I take it and my little white Fender Custom Shop Mustang. I also have a ’66 Jazzmaster.

Your live rig is small, but huge-sounding. What are you using?

Before the tour, I profiled all my amps – a little Top Hat, some great old Silvertones, and a vintage Fender – into a Kemper Profiler. It’s f***ing amazing. I didn’t think it was possible, but it is. I would love to go out with all my gear, but it’s not cost-effective. I have two Kempers and my guitar, and I’m good to go. I don’t even use a cab – it goes right to the board. There’s no sound coming from any speaker. It’s all profiled for my cabinets, speakers, effects, and my entire chain’s all coming through the monitors.

Which effects do you add?

I’m trying to stay true to Prince’s tones. I made sure I was using the right pedals; I have the old flangers, distortions, and my Crybaby. And I use expression pedals for boost, volume, tuning, and mix on my delay. For the Kemper, my backup is on two thumb drives. If anything f***s up, I put a drive in and reload. It has saved me thousands of dollars of cartage, and I get an amazing sound out of it. I had some help because it can be a little complicated, but once I dialed it in, I was getting sustain like I never thought I’d get. With the clean tone, I might as well be going right to the board. I profiled my Dumble through the Kemper. They translate beautifully onstage and sound even bigger.

What’s next on your schedule?

We’re taking a break and then hitting the road [this spring and summer], and Lisa and I did a third season composing for “Shades of Blue.” We’re also composing for a documentary for HBO.