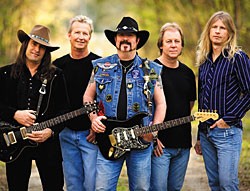 Hughie Thomasson was a founding member of the Outlaws and played guitar in Lynyrd Skynyrd for nine years. He’s now back with the Outlaws.

Skynyrd contacted Thomasson in the mid 1990s.
“They needed somebody to fill in for Ed King,” the guitarist recounted. “The Outlaws were still playing, but I told them I’d gotten a call from Skynyrd about filling in, and they said I should do it.

“I went to Nashville and spent time with Ed before I ever went to rehearsal with the band, so he could show me what I needed to know; I wanted to make sure I got it right. Then I went to rehearsal in Jackson Hole, Wyoming. Six months rolled around, and Ed didn’t come back; I’m not sure what happened – that was between them – but I stayed with Skynyrd until 2004. We made several albums, two live DVDs, and did dozens of TV shows. I co-wrote 32 songs with those guys. It was a pleasure and an honor.”

Guitarist Ricky Medlocke, best known for his work in Blackfoot, joined Skynyrd soon after Thomasson came onboard as the “the Fender guy,” primarily playing a custom-made Telecaster-style guitar with a middle pickup and a volume control in a Stratocaster-like position. In his years with Skynyrd, Thomasson relied on a custom Fender Stratocaster with Seymour Duncan pickups, with coil taps.

“That’s what Skynyrd wanted,” he averred. “And that’s what I was there for – a Fender sound between two Gibsons, and that sound would still cut through.”

In late 1999 and 2000, Skynyrd and ZZ Top toured together, and jammed during a New Year’s Eve Millineum concert in Houston.

“I’ve got a picture of that on my refrigerator!” Thomasson enthused. “That was a wild tour. The crowds were terrific every night, playing with ZZ Top was great, and a chance to jam with them was really cool.” 2000 also saw the release of So Low, which was really more solo Thomasson, with previous Outlaws members playing basic tracks. He plans to re-release the album as Lone Outlaw.

As for his departure from Skynyrd, he says, “It was just time. It had been a great time in my life, and I love those guys. Vicious Cycle, the last album, kind of capped things, for me. I always gave 120 percent, never slacked off. Gary was very demanding about the way the band sounded, and that’s why the band is successful. But I wanted to play Outlaws music again, and I wanted to sing; I wasn’t doing much singing in Skynyrd, but I was doing a lot of guitar playing. Plus, Skynyrd likes to do a lot of unison guitar playing; that’s one of their trademarks. But the Outlaws do a lot of harmony guitars. I left Skynyrd on good terms, and we keep in touch. Who knows – maybe the Outlaws and Skynyrd will tour together again!”

Thomasson describes 2005 as “the reunion year” for the Outlaws, detailing “Our original manager got involved and made some calls, and everybody was still playing. Henry Paul was playing with Blackhawk, a very successful country band, David Dix was teaching drums at the University of South Florida. Monte Yoho, the other drummer, was playing in Branson, Missouri. Everybody kind of dropped what they were doing to come back and be part of the reunion tour. After that, Henry wanted to go back to Blackhawk, but the rest of us wanted to keep the Outlaws going. Chris Anderson’s playing guitar with us now; he’d played with the Outlaws before but had never made a record with us. Randy Threet, who also played in Blackhawk, is the bass player.”

Thomasson still has his 1972 three-bolt Fender Stratocaster, and noted “Ron Nevison, who produced the Ghost Riders record for us, suggested that I use that guitar only in the studio, which I did for a bunch of years. But I’m using it live again; it wants to be played – it doesn’t need to be sitting in a case in a closet!”

The Outlaws are touring this year, and Thomasson is enthusiastic about the band’s future. They’re also completing an album titled Full Circle, portions of which can be heard on the band’s web site, which also details bandmembers’ axes.

“We’re three songs into it,” Hughie said of the album, “and we’re going to try to finish it up by the end of the summer, for a fall release.”


All copyrights are by the author and Vintage Guitar magazine. Unauthorized replication or use is strictly prohibited.