If you were at the 1969 NAMM show in Chicago, perhaps you saw what was most regarded as that year’s show-stopping piece of gear – the Ampeg Dan Armstrong “see-through” guitar.

While “see-through” guitars have never been commonplace, today they are offered by several manufacturers, including BC Rich, Dillon, and Ampeg. But when they were introduced in ’69, there was nothing like the latter’s axes, designed by soughtafter session musician/guitar expert Dan Armstrong.

With a cool, unique body made of Plexiglas that was machined and finish-sanded just like a wood body, they had a bolt-on maple neck with 24 frets (a full two octaves) clear of the body for greater access, and interchangeable pickups so a player could tailor its tone. The six interchangeable single-coil pickups were designed by Armstrong and pickup guru Bill Lawrence, given suitable monikers like Rock Treble, Rock Bass, Country Treble, Country Bass, Jazz Treble, and Jazz Bass, and sold for $35 each. Its aesthetics were topped off with a faux-woodgrain Formica pickguard and matching headstock overlay, while its tones were controlled via master volume and tone pots topped with cool metal knobs, a three-way tone toggle switch, and a metal Danelectro-style bridge with rosewood saddle. After early models experienced tuning stability issues, Ampeg started using high-quality Grover tuners as standard equipment, and slightly rewired the tone toggle.

The instruments quickly became popular with many top rock artists of the day; the Stones’ Keith Richards and Bill Wyman used them on tour starting in late ’69, as did Leslie West and Paul McCartney, while Cream bassist Jack Bruce used the bass version. Financial issues between Dan Armstrong and Ampeg led to the guitars being discontinued in 1971.

Fast-forward to the 1998 summer NAMM show, where Ampeg again launched the ADA guitar and bass, this time made in Japan by Fujigen and employing pickups made by Armstrong’s son, Kent, and with upgraded individual brass saddle inserts and a slimmer neck profile. It stuck around until 2001.

The latest version, the ADAG, shares the same specs and improvements as the second version, plus a new neck joint with smaller, flush-mounted screws accessed from the back of the guitar (like traditional bolt-ons), a modern dual-blade humbucking pickup along with the stock Rock Treble single-coil, and a new TKL case with Ampeg’s Blue Diamond tolex. Also noteworthy is the return of the original neck profile. Ampeg recently invited us to take a turn with the new guitar, and we were happy to oblige.

Our test axe boasted excellent fit and finish typical of Japanese-made instruments, including a nicely executed shallow-cut bone nut, clean, level, well-polished frets, and a meticulously routed, sanded, and polished Plexiglas body. While we were expecting the ADAG to be somewhat beastly, weight-wise, at just a bit over nine pounds it was quite tolerable, especially given its contoured body, which hangs comfortably and is well-balanced. The slim-taper neck profile and low action, with the 24.5″ scale length, give the ADA6 a fast feel, and its 24 frets clear of the body lend easy access to the upper registers. 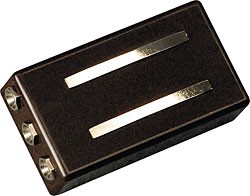 Through the clean channels of both amps, the Plexi’s Rock Treble single-coil gave a very strong, punchy clean tone with plenty of P-90-style midrange and high-end bite. The guitar was noticeably resonant and more musical than we anticipated, with real personality. Adding a bit of amplifier overdrive and gain produced a pleasantly aggressive, bright rock tone with a fair amount of sustain and in-your-face bark as we played power cords. After we swapped the Rock Treble for the new Rock Sustain humbucker (easily accomplished by loosening a knurled thumbscrew on the back of the guitar) the Koch’s overdrive channel produced a thick high-gain distortion with clear, articulate highs and even mids. The tone toggle switch has three settings; a high-end roll-off, a tone bypass, and an active rotary tone control we thought was more useful with the single-coil. For most of our tests, we left the toggle in the middle (bypass) position.

Whether or not you think it’s cool that major acts like the Foo Fighters and Red Hot Chili Peppers are using the Dan Armstrong Plexi guitar, there’s no denying that it has clung tight to every bit of the “coolness” that made a splash in ’69. Add the fact that it’s a solid player with a variety of very usable tones, and you’ve got a winner.