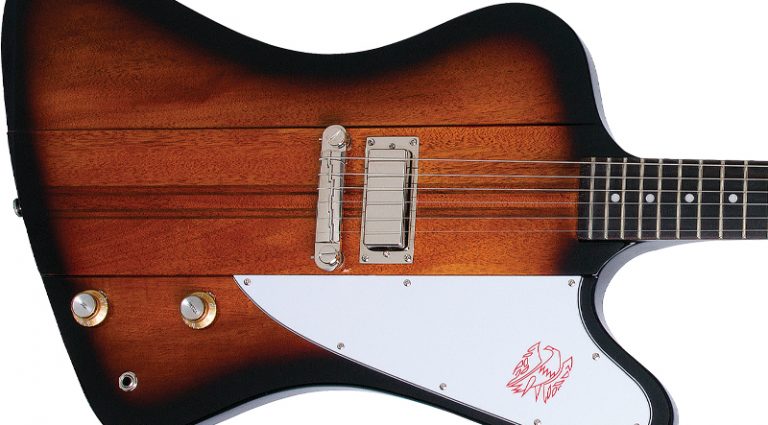 One thing fans like most about Joe Bonamassa is that, in addition to his bluesy chops, he’s a guitar nut like us. His collection is renowned, and within his hoard a 1963 Gibson Firebird is a particular favorite. Now Joe has teamed with Epiphone for his fourth signature model, the Limited Edition “Treasure” Firebird-I, based on that vaunted ’63.

A recreation of the Firebird’s timeless neck-through design, the Treasure comes in two finishes: Tobacco Sunburst and a yummy Polymist Gold. There’s one ProBucker FB720 pickup and a wrap “lightning bar” tailpiece/bridge, along with gold top-hat Volume and Tone knobs. The guitar has Kluson banjo/guitar tuners and an ivory PVC nut. Look for the classic pickguard with red Firebird logo and an included custom gig bag.

The Treasure’s reverse body is a nine-piece laminate of a mahogany raised center block and two wings (four walnut stripes running from end to end). The neck features a rosewood fingerboard with dots, 14″ radius, and Gibson’s standard 24.75″ scale. According to Epi, the neck carve is a based on Bonamassa’s original Firebird and features a large C profile – it’s sizable, but not uncomfortable. The headstock is traditional Firebird, with the six-on-a-side tuning scheme (Kalamazoo’s none-too-subtle Fender homage). A dual-action truss rod is among the fresh innovations.

Warmed up, the Joe Bonamassa Firebird proves plenty hot enough. Again, its neck is beefy, but fast and comfy, ready for your best Johnny Winter, Allen Collins, or JB licks. True to form, its single mini-humbucker was brighter and twangier than a full-sized ’bucker, but still butt-kicking with the overdrive ladled on. As with most single-pickup guitars, the Tone knob becomes an important tool for cooling off the treble and adding some Clapton-esque “woman tone” to the proceedings.

There aren’t many debits with the Treasure, but the Firebird design entails a certain amount of neck dive, and that’s just part of its vibe. If you haven’t spanked a Firebird before, it will take you a few minutes to get used to the banjo-style tuners, but they’re well-crafted and hold their tuning like champs.

With a street price well under a grand, this limited edition Firebird is a keeper, with both historic looks and a sweet, killer tone.