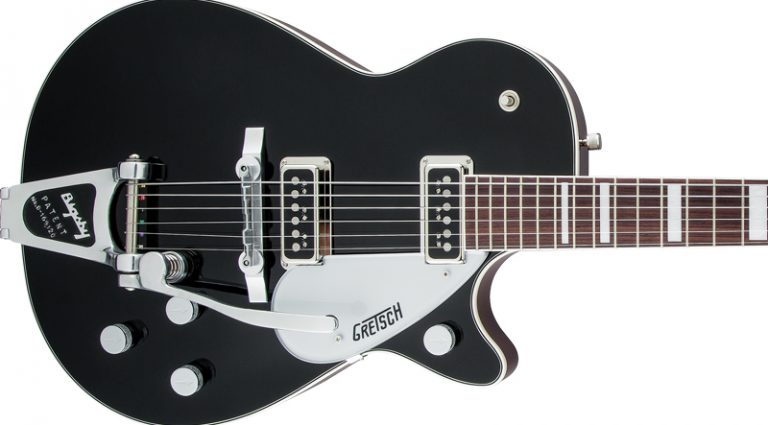 Hot dog! Gretsch has long dreamed of issuing a Cliff Gallup signature guitar, but the stars never quite aligned – until now.

Gallup, of course, was the fleet-fingered guitar man who hot-rodded Vincent’s first two LPs. He added stunning intros, dazzling riffs, and virtuosic solos to cuts like “Race With The Devil,” “Crazy Legs,” and “Be-Bop-A-Lula.” And then he was gone, retired from the Blue Caps to avoid the slog of the road and to stay close to home. His reign was short, but rock-and-roll guitar was never the same.

All of which makes this signature edition that much more exciting. Gallup was one of the most famous and influential guitarists to ever play a Duo Jet, inspiring many players – including one George Harrison – to pick up the model.

Gallup’s guitar was as stock as they come, so this signature isn’t a modded or sticker-coated replica with every scratch and paint chip perfectly reproduced. Instead, it’s a glorious, painstaking replica of a ’54 Duo-Jet from Gretsch’s top-line Professional Collection. And it proudly bears Gallup’s signature on the truss cover.

Many have speculated that Gallup played a ’55 or ’56 Duo-Jet, but Gretsch did its homework and got an A+ – Gallup’s was indeed a ’54. They tracked down the original receipt, then doublechecked the guitar’s serial number and details against ’53 models to come up dead-certain on the vintage.

If you’ve never played a 6128, you owe it to yourself to pick one up. The Gallup guitar has a chambered mahogany body with a maple top finished in gloss nitrocellulose lacquer. This combines to give it a unique sound, somewhere between a Les Paul and an ES-335, but all its own.

The neck is a standard vintage U-shape with a 12″ radius, capped by a rosewood fingerboard and big-block pearloid inlays. With 22 frets, it’s a well-balanced, highly playable instrument.

Pickups are DeArmond’s lauded DynaSonic single-coils, controlled by a three-position toggle. The bridge is compensated aluminum; examining Gallup family photos, his 6128 did not have the Melita bridge (as often believed) of the standard-tailpiece model because it came with an optional Bigsby B3, as here.

It’s long been speculated that Gallup recorded the classic Vincent sides through Grady Martin’s Standel amp but played a tweed Fender live. So what better amp to try out the Signature 6128 than a ’59 tweed Deluxe (with a tube-powered Echoplex EP-2 for good measure)?

The first strum of the Gallup’s flat-wound .011-.050 strings transport you back to May 4, 1956, and Gene’s first session, which yielded “Race With The Devil.” That tone, that timbre, that twang – it’s all here. The guitar is a six-stringed time machine.

Pick some Travis-style licks and the 6128 rings like a bell, providing stunning clarity to each string and note. Dig in hard with some doublestops – as Jeff Beck did when introducing the guitar at a tribute showcase during NAMM – and the 6128 responds with fiery tone. This guitar simply loves to be played.

You might be thinking ahead about replacing that early fixed arm on the Bigsby – even Chet Atkins and Duane Eddy never cottoned to it. Try it, though, and you’ll likely find that it’s perfectly placed for everything but power-chord windmills. Mr. Beck seemed to have no issues with it. Or with the guitar as a whole!