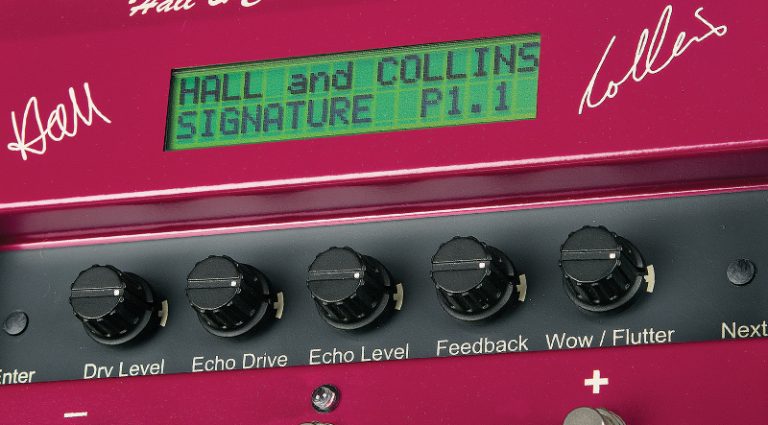 For guitarists whose lives are dedicated to replicating the echo effects heard on songs like Hank Marvin’s “Apache,” Hall & Collins Signature Echo is at their service.

Combining analog and digital technologies, it re-creates multihead echoes emulating a range of vintage sounds that would leave one broke and alone if they had to find and buy the real thing. The Signature has 64 preset patches and 64 editable user patches along with Dry Level, Echo Drive, Echo Level, Feedback, and Wow/Flutter controls. It’s a big, rock-solid mono effects pedal that’ll take a lickin’ and is powered by a 12-volt adapter. It also allows the owner to scroll through preset patches using the Patch Down and Patch Up buttons and the LCD display (these also double as Minus and Plus buttons in Edit Mode).

This U.K.-constructed analog-digital hybrid was engineered to summon the soughtafter old-school sounds heard from the fingertips of Marvin and others, and the unit’s preset titles are aptly named to prove it. The controls are easy to suss, but editing requires less-than-intuitive combinations of switch pushing; once they hear the results, though, players won’t mind the required extra effort.

The Signature Echo colors an amp’s tone even when bypassed, but that’s a good thing. Its preamp emulates the editable sounds of the Meazzi Echomatic (1, 2, and Model J), the Binson Echorec 2, Meazzi’s Factotum Special, the Vox Long Tom, Roland’s RE-301, the Pearl Echo Orbit EO-301, and Klemt’s NG51 tape-echo machines.

Yes, the Hall & Collins Signature Echo is pricey, and it might be too big or clunky for a lot of pedalboards, but it’a a no-brainer addition to the rig of any fan of beautifully lush vintage echo sounds.