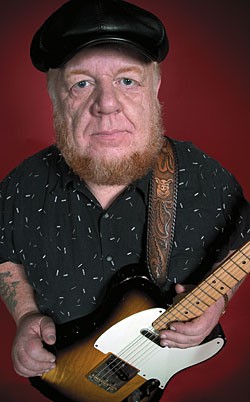 For Redd Volkaert, 2008 has been a good year. His band, Heybale, released an excellent debut in the spring, and with summer came his fourth solo disc, Reddhead. He’s on the sweet side of a career that began at age 13 in his dad’s band, backing dancers in the strip joints of Vancouver, and led to stints with dozens of country greats, including a longtime gig as one of Merle Haggard’s Strangers.

You recently sat in with Jimmie Vaughan’s band at Antone’s, in Austin. Considering your history, it was a piece of cake, right?
Well, maybe for them. But I was a nervous wreck. It’s a blues band – they don’t need my big country ass up there bumbling around (laughs)! But he’s got a smokin’ band.

You’re a Tele guy, Jimmie’s a Strat guy, but the difference in your tones is more than just guitars.
He likes a really dry kind of thin (tone) and his action’s low, with light strings. He’s trying to replicate the old blues guys’ “plink” sound they got playing Epiphones in the late ’50s – that John Lee Hooker tone. They didn’t use a pick, they used their forefinger and pulled up. And he nails it. In the T-Bird days his lead playing was a bit more wild – a lot more bending. Now it’s a lot of T-Bone Walker kind of licks.

My favorites are still Roy Nichols (Merle Haggard), Don Rich (Buck Owens), and Jimmy Bryant. For Tele guys, they’re the top three. Nichols has a thicker, more midrange barking sound, Don Rich had a real thin sort of chicken-pickin’ sound. I’ve always wanted the big, thick, fat, clear jazzy sort of steel guitar tone – more neck pickup, use the lower end as much as you can. I turn the tone all the way up on the guitar, and to record I get the volume all the way up to get the ultimate sound out of the amp; I like ’em really clean. I have a couple ’70s Peavey LTD 400s, but ideally, it’s a Twin Reverb for me. I use heavy picks and LaBella strings .011 to .052.

Are players using fewer unique tones these days?
I think too many don’t bother to try for something different. They buy the identical amp, get the same kind of pickups, same kind of wang bar, same fuzz boxes and shoot for that heavy metal sound or the arena rock sound or the blues guy tone. It’s hard to say, “That’s so and so playing.”

There’s something natural about a Telecaster…
Exactly. It doesn’t have spiked hair with bleached tips. I’ve got a Glendale copy. It’s really well made. And I’ve got a couple of Tomkins replicas made in Australia. One has Jason Lollar pickups – one of which is a Charlie Christian copy. I’ve still got my ’58 Esquire with the real Charlie Christian – it’s noisy and sounds great. I also have a ’51 Nocaster. Got it in Nashville from a girl I worked on for about seven years and wound up swapping her a couple of Gibsons. 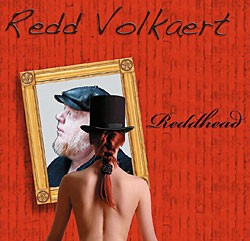 You used them all on Reddhead?
Yeah, with several amps including a DR Z MAZ 38 on the rockier things and the Peavey LTD for the real clean country stuff. I got a pedalboard with a bunch of stuff. I have a Durham Sex Drive line booster, which is like taking the old MXR Blue Box compressor and turning the compression off with the volume all the way up; it hits the amp harder. I leave it on, put the guitar through it and the other pedals – but they’re not always on – and use the reverb in the amp, a little from the board. We used 2″ tape to record everything up until the mastering.

That album was basically done live?
Definitely. I wanted to sound like our bar band at a gig. I couldn’t get that sound in Nashville. My first CD was too compressed; the drums were all triggered, digital this and that. For this one I brought every amp I owned, set ’em in a half circle, spread the mics all over with an overhead condenser to pick up the room noise, and played all day and night. I wrote down “…this amp with that mic…,” etc.

You used your regular club band. Have they all been with you long?
Yeah, except Buzz Evans just moved to Austin from Vegas. He’s an unbelievable jazz guitar player and piano player, but he’s known as a steel player in the country thing. He just turned 70; he shows up for the gig, wags his stuff in on a dolly, sets it up, tears it down, and wags it out of there. No trouble, happy to be there. He’s like a ray of light – a typical old musician, funny as hell in a bitter sort of way. He’s seen all the s*** forever, dealt with it all. When I was a kid I played with older guys in their 40s who were old bitter sour guys, and funny as hell. And to meet him now I feel like a kid again.

Like when you were a 13-year-old playing strip bars with your dad’s band…
Yeah. I’d sit behind their amps, beside the drummer playing rhythm with ’em. Or thinkin‘ I was playing with ’em. It was great.

And you had the benefit of your dad’s experience as a working player.
But of course I wouldn’t listen to him. He was my dad (laughs) what’d he know? When I was 15 he said, “Well if you’re so f*****g smart why don’t you leave home while you still know everything?” (laughs). But he also said, “Listen to everything, enjoy everything. Take a lick from here and a lick from there. You think you’re good? Listen to Shuggie Otis and Mike Bloomfield.” I miss him every day.


This article originally appeared in VG‘s November 2008 issue. All copyrights are by the author and Vintage Guitar magazine. Unauthorized replication or use is strictly prohibited.
Redd Volkaert & Bill Kirchen (Twangbangers)