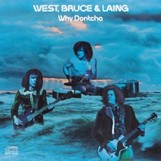 When one third Cream and two thirds of Mountain joined to form West, Bruce & Laing in 1972, expectations were not exactly high. This, their first album, was a decent effort and enough to appease fans of both bands. But how does the music hold up now? Not badly at all!

True, time has been kinder to the softer, more musical Jack Bruce/Pete Brown compositions than it has to the hard rockers, but there’s one rockin’ 12-bar snippet that makes this CD essential listening; it comes at 2:35 during “Love is Worth the Blues” – 40 seconds of pentatonic plectrum bliss that defines Leslie West’s style and tone – Gibson through Marshall with violin-like vibrato and economy of notes that on a simple, emotive, concise 12th-fret solo.

Most of this album is full of gruff vocals, too-busy bass playing, overdubbed guitars, and a mix of tempos. Things did get more interesting for the band after its second record and a live album issued after the band imploded. But Why Dontcha is the album everyone expected – nothing more, nothing less.