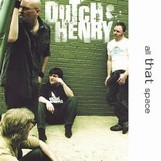 Dutch Henry writes the kind of soaring pop-rock that while never being completely out of fashion probably won’t be Top 40 any time soon. The title cut is a bouncy pop piece, much like many of the songs here, and calls to mind the Beatles or Beach Boys. Sure, other bands do the same thing, but not as well. The song has a unique lyric about outer space, and the guitars by John Merchant and Greg Miller are suitably trippy. Throughout this disc, guitars form and dominate the songs in part because Merchant and Miller sound joined at the hip. “Smile” is a great example, with its melodic, intertwining guitars. “Aron Gordon” is oddly sweet country-pop that calls to mind the likes of NRBQ, with plenty of hot country playing. “Lonely You” is a hugely quirky pop song and its solo, filled with hints of jazz, mixes marvelously with the Beach Boys-style background vocals that highlight the song.

This Michigan band has all the tools needed in this day and age; they write great songs, the musicians are top-notch, and they play music that sticks in the head.


This article originally appeared in VG‘s June ’08 issue. All copyrights are by the author and Vintage Guitar magazine. Unauthorized replication or use is strictly prohibited.