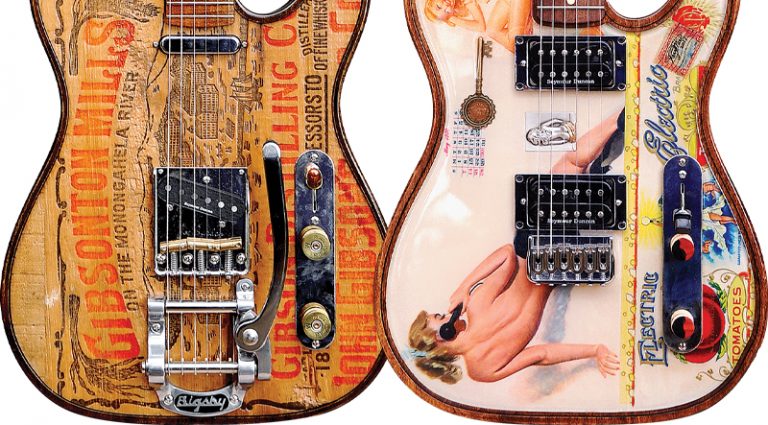 Walla Walla has carved a niche in the world of highly customized guitars and basses in the tradition of those time-honored Leo Fender archetypes. Their Maverick Pro Series offers up one model with classic single-coils and a tremolo bar, and another with humbuckers and a hardtail. You might want to strap a bib on before handling these beauties, though, as sudden drooling is possible.

First axe on the block is from Walla Walla’s Vintage Wood series – a Tele-shaped body with a piece of reclaimed wood as its top. This one uses the logo of Gibsonton Mills, an 1800s whiskey distillery once located south of Pittsburgh, Pennsylvania. The top gave the guitar an immediate vintage flavor and sense of the past. While every Walla Walla plank can be customized to the buyer’s tastes, this Maverick Pro sported a chambered poplar body, 22-fret bolt-on neck (25.5″ scale), deeply flamed maple fingerboard and neck with a soft-V profile, Seymour Duncan APT single-coil pickups, Sperzel tuners, and a Joe Barden bridge with Bigsby trem. Its unusual Volume and Tone knobs were made from the ends of shotgun shells, while a bullet casing formed the three-way pickup selector.

Another unique feature was the Sound Tunnel Port, located under a metal star on the north side of the upper bout. Occasionally these are seen on high-end acoustics, but it’s a novel idea for a chambered electric – indeed, the port delivered a nice acoustic resonance when playing unplugged. For pickups, Walla will install models from Seymour Duncan, Fralin, Barden, EMG, and TV Jones. Best of all, this Vintage Wood weighed under seven pounds.

The other Maverick Pro tested was from the T-Top Crystal series, which can have objects embedded in their resin tops – think coins, keys, badges, medallions, and other metal ornaments. This model has a 22-fret neck of flamed maple with a rosewood board, full-chambered poplar body. Hipshot non-trem bridge (Barden, Wilkinson, and others available), and Duncan Pearly Gates humbuckers. Also look for a NuBone 1.625″ nut and different fret-size options.

Plugged in, both guitars displayed fast playability thanks to those slim, speedy necks and compound radii (9″ to 12″). Fitted with its Tele-style pickups, the Vintage Wood was suitably twangy, while the humbucker-laden Crystal model rocked like a good Status Quo record. You can only imagine that each will sound better as you play them through the years – they play great now, but in a decade or two, they could sound even better as the wood opens up and the already-fine necks begin to play in to that exalted standard.

As every Walla Walla guitar is one-of-a-kind, both the Vintage Wood and Crystal models tested were original, fun, and exuded an old-school vibe. One key attraction is that you get that kind of “custom shop” attention and detail at a somewhat lower price. It’s still higher-end, but nothing like the astronomical numbers often seen these days. And they’re brimming with history and Americana.