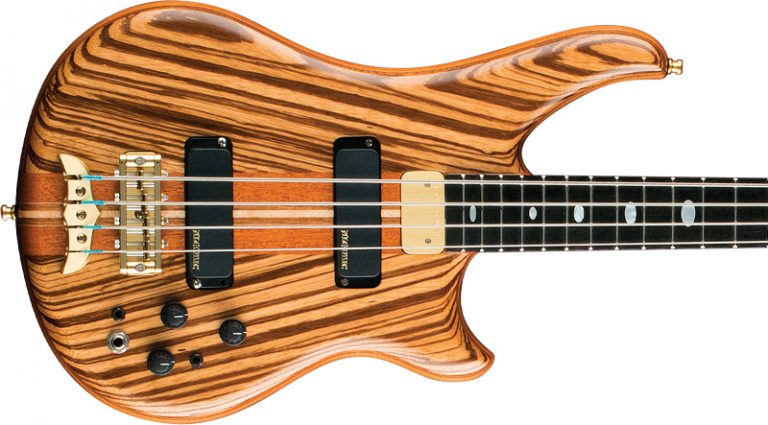 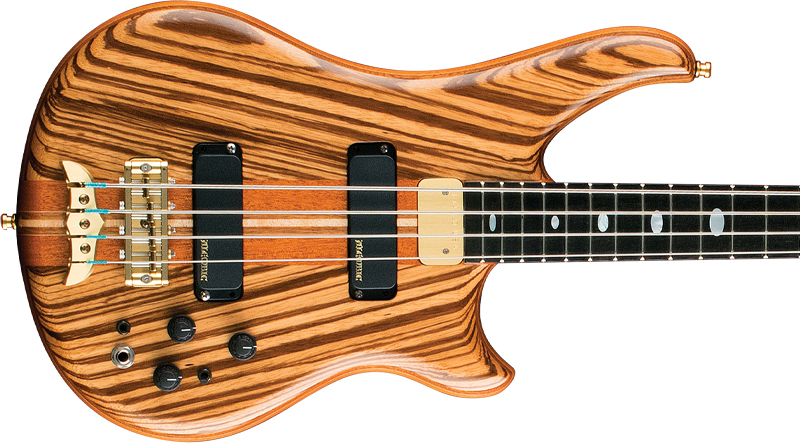 Alembic basses are the stuff of low-end legend, famed for magical tones in the hands of Stanley Clarke, Jack Casady, and John McVie, among others. The newer Essence 4 series is meant to capture that Alembic experience with a body lighter than the company’s hefty axes of the 1970s.

Like most Alembics, the Essence 4 body and neck are made with exotic woods, neck-through construction, and gorgeous laminate combos. Our test bass had a 34″ long-scale neck of walnut and maple stripes between mahogany pieces topped with a 24-fret ebony fingerboard and oval mother-of-pearl inlays. The mahogany body included maple/walnut accents and a richly grained zebrawood top.

The famed active circuitry includes a master Volume control and two proprietary MXY4 pickups selected via a seamless Pan knob. The real star of the show is the Filter control, which evokes a massive EQ sweep, from that Alembic snap to a deep, seamless roar, like the bass pedals on a pipe organ. In the latter setting, the adjacent Q switch gives the tone an 8dB boost for added bottom. For even more fun, an on/off switch activates an array of LEDs on the side of the fingerboard, their brightness controlled by a trim pot in the cavity (another on the internal preamp card controls overall gain).

As for playability, the legend is true; this Alembic is as fast as anything out there. Its smaller C-profile neck is meant for speed and comfort. The Essence also retains all the tonal magic expected from an Alembic, particularly in the upper range. There aren’t many basses that possess such a massive EQ span and let the player pinpoint exact frequencies to emphasize. As beautiful as this Essence is to look at, one has to marvel at the beauty of its preamp and pickups.