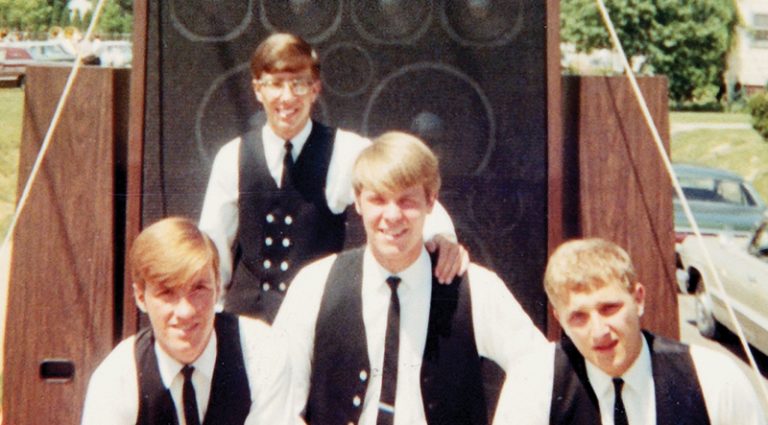 Drew Moniot and his band, The Sequins, were on top of the world, playing Gibson SGs through endorsement-deal amp stacks as 16-year-olds in 1967. Among their many favorite memories was playing through the Magnatone Monster – the world’s largest guitar amp.

If you happen to be a fan of Neil Young and Crazy Horse and you’re thinking, “That looks really familiar,” you’d be right. Young has owned one of its matched speaker cabs and used it as a stage prop for years. But The Sequins actually played through the thing.

Moniot’s path to the Monster came via another then-new amp that was gargantuan up against anything else, and traces a tale that could only have transpired in a long-ago age when innocence, innovation, and youthful enthusiasm for rock and roll could still crash headlong into some joyous alchemy of pop-cultural splendor. Moniot lends context to our dreamscape…

“We were a local high-school rock band in our hometown of Butler, Pennsylvania, playing Top 40 music and learning one or two new songs a week, usually playing two gigs a week earning money for college and expenses – and having the time of our lives!” he relates. “I was the lead guitarist, lead vocalist, and leader of the band, which had two guitars, bass, and drums. At one point, myself and the other guitarist, Marvin Ordy, both had Cherry Red ’63 Gibson SGs while the bassist, Dave Lytle, had a matching EB. Those made us the envy of many local bands.”

What really propelled The Sequins toward their brush with gear history was not the SGs, but the Vox and Gretsch amps they first plugged into.

“The Vox amps were routinely blowing up,” Moniot said, recalling repeated trips to have them serviced at a music store in Pittsburgh, an hour away. But a solution was at hand.

“In ’66, Dave saw a newspaper article in the Butler Eagle about a music plant opening (in nearby Harmony) – the Estey Music Company – to manufacture electric guitars and amplifiers.”

In the mid/late ’50s, Magnatone guitar amps (with stereo and vibrato) were manufactured by Magna Electronics, in California. But, as Douglas Ahern writes on magnatoneamps.com, by the early ’60s, Magna had been bought by the Estey Organ Company (later Estey Electronics) and aimed to plunge headlong into solidstate designs while also locating more centrally. An executive named Jack McClintock had been hired by parent company Commercial Credit to sort the stumbling Magnatone and Estey operations, and it just so happened McClintock was from western Pennsylvania, where Commercial Credit held a long-term lease on a dormant manufacturing facility in Harmony. 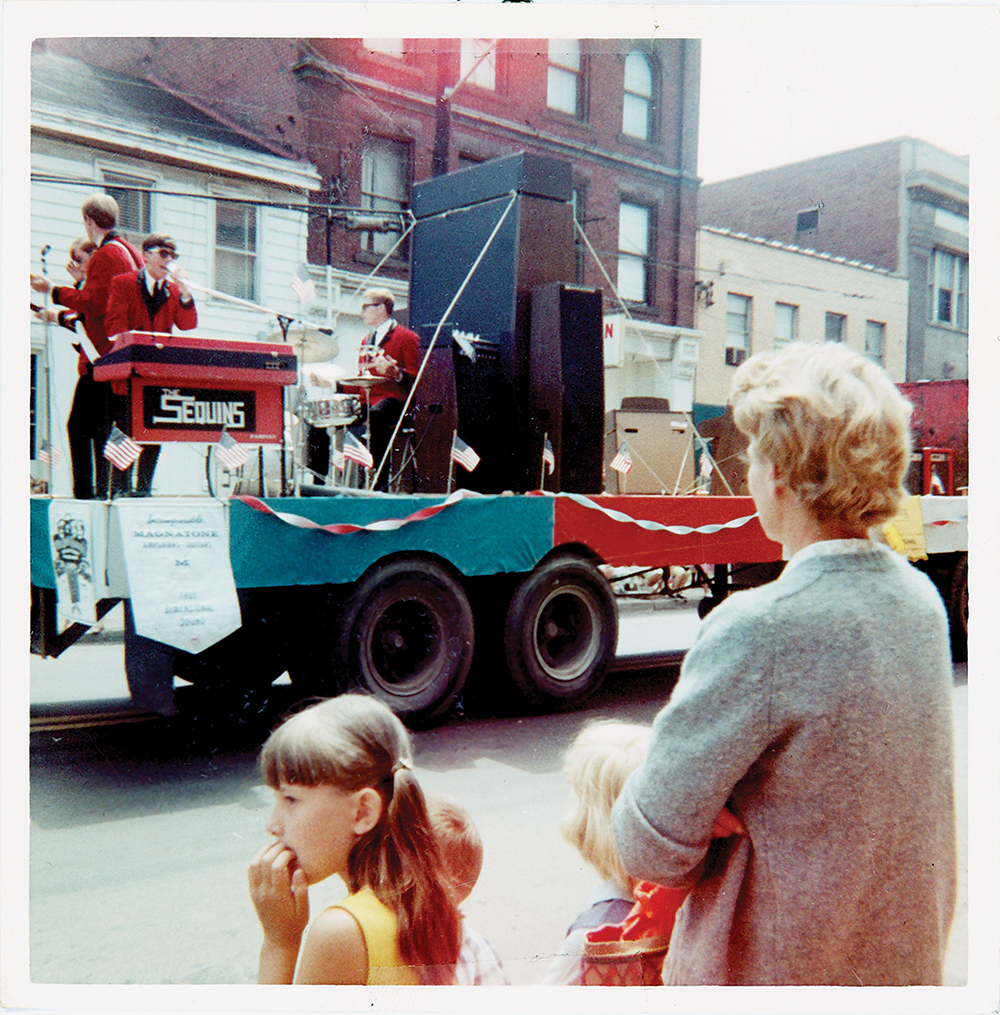 “We called Estey and made an appointment to check out the new equipment they were going to be manufacturing,” said Moniot. “They head of the company was a guy named Hank Milano, and we hit it off from the start. He invited us to visit the plant and play for the employees. We set up and played to workers and managers right on the floor of their assembly line. They loved it and offered us an endorsement deal; we would play their state-of-the-art solidstate amps, which they’d sell to us at a 50 percent discount, and they’d service and repair the equipment free of charge during the length of the agreement.”

The amps Moniot and Ordy took home were Magnatone’s M35 The Killer, which made 300 watts output into two 15″ speakers and two high-frequency horns. They had two independent channels, each comprising the same modular preamp board with controls for Volume, Bass, and Treble, and a three-way tone switch that delivered Normal, Mellow, and Brite settings. Onboard effects included transistorized reverb and true pitch-shifting vibrato, a trademark carried over from Magnatone’s better-known tube amps. The bass amp acquired by Lytle was the matching 300-watt M32 Big Henry, with the same modular preamps, dual 15″ speakers, and no effects (pity the poor drummer, Dan Metrick, with all this firepower behind him). These brutes aped the popular head-and-cabinet styling used for most big amps of the era, but the “heads” were attached to the tops of the cabs, effectively rendering them giant combos measuring 12″ x 24″ x 45″ and each weighing 105 pounds.

“They were like nothing we’d seen in terms of power and performance,” Moniot remembers. “Then a few months later, Magnatone asked if they could install a fuzz circuit in one of the channels. We gladly hauled the amps down and traded them out while the new circuits were being installed. We were invited into their audio lab to talk to the technicians, who wanted to speak to us about the songs we were playing and the sound we were after. Here were guys in black-rimmed glasses with pocket protectors full of pens who had Jimi Hendrix albums sitting on their work benches next to their oscilloscopes, apparently analyzing the parameters of his overdriven Marshall amp sounds. They really wanted us to work the amps, and we did! We were playing some large venues back then and really cranked them up. Occasionally, we’d blow a speaker and were given a replacement amp until we could get back. It was a dream!”

As massive as two Killers and a Big Henry must have sounded echoing around gyms, cafeterias, and rec centers, it was nothing compared to what was in store for the young Sequins.

In the early summer of ’67, the band got another call from Milano, asking if they’d like to appear on a Magnatone-sponsored flatbed truck in Zelienople’s Fourth of July parade.

“Hank said, ‘No need to bring your amps, we’ve got you covered,’” Moniot recalls. “We assumed they’d have the flatbed rigged with amps identical to ours, so we just brought our guitars, drums, and my Farfisa combo organ. When we arrived that morning, they took us to the flatbed and we stood in awe at the sight of this enormous amplifier. We thought it was a prop, but were told it was a fully functioning guitar and bass amp… and that it had 1,000 watts of power.”

This would likely have been among the first amps dubbed “The Monster,” a.k.a. “Tiny Tim.” Apparently, only a few were ever built, one of which made its debut that day in Zelienople before heading to the NAMM show a year later. None were offered for commercial sale, but they were sent to guitar stores and trade shows as promotional props, no doubt as some declaration of Magnatone’s intent to dominate the wattage wars – which the company might have briefly done, according to specs at least, but never did in terms of sales volume.

According to Ahern, all Monsters were shortly called back to the plant to be destroyed, the one retained by Neil Young remaining the only known extant example.

“We were speechless,” Moniot declares of their encounter with The Monster. “The whole thing was dreamlike; it was hard to believe the amp was real. But it was. We plugged in, set the levels – which were pretty deafening – and braced ourselves for one of the highlights of our young musical lives. As the parade got underway, we hit our first song and were blown away by the power. It was loud – so loud, in fact, that we were drowning out the marching band behind us… they seemed to have difficulty staying in step. The crowd loved it. Afterward, one of our parents snapped photos of us with the amp on the back of the truck. We knew it this was something we’d treasure forever.”

The Sequins continued playing their own 300-watt Magnatones for the next couple of years, until college and day jobs took them in different directions, Moniot to a career in broadcasting that keeps him occupied to this day. After occasionally plugging into the M35 while home from grad school through the ’70s, he sold it in 1978 to acquire something less mega-amp-like. He still has his SG. Through it all, however, Moniot has never forgotten the experience of crushing Zelienople with the 1,000-watt Monster.