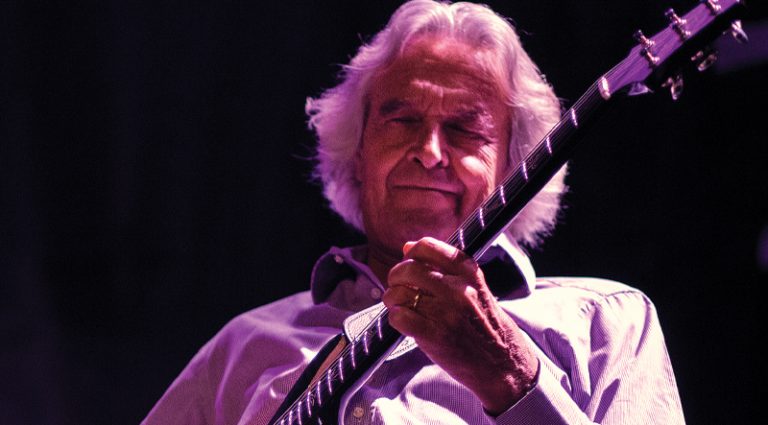 The name John McLaughlin is synonymous with jazz-rock fusion, the genre he helped invent and sustain for the past 50 years. At the end of 2017, the guitarist will be performing a final American tour, this time with co-guitarist Jimmy Herring and John’s incredible band, the 4th Dimension. We recently checked in with the virtuoso on his rig, the tour, and fiery new album, Live at Ronnie Scott’s.

You first played at Ronnie Scott’s Jazz Club in 1968, when you were about 26 years old. What do you remember about it?

It was the Mike Carr Trio, with Mike on Hammond organ, Jackie Denton on drums, and me – a classic organ trio. It was a big deal because playing Ronnie Scott’s back then was to make it in Great Britain. Ronnie himself was a genial person and great tenor-sax player, and helped young jazz musicians in so many ways. He was instrumental in helping me with my visa for America in 1968 – I owe him so much.

What was it like to play there again in 2017, with the 4th Dimension?

My band always has great energy, but to play again in Ronnie’s brought back so many memories, personally, and there were probably people in the audience who’d seen me there in the ’60s. The two shows we played were very meaningful. In a way, it’s my personal thank-you to Ronnie.

On the record, you’re reinterpreting the music of Mahavishnu Orchestra. Did you let the band determine the arrangements?

The musicians in 4th Dimension are the best around, so once I give them the chart, all I have to do is make a suggestion here and there. If, for example, you listen to “Miles Beyond” from the 1971 recording, and compare it to the new live album, you’ll hear its integrity like the original, but the playing is most definitely of today.

Tell us about your PRS guitar.

Paul’s guitars are the greatest, and he is as crazy about making guitars as I am about making music. The feel of the necks, the pickups, and sound are all great, plus they’re the most beautiful guitars made today. I got my first PRS from Paul about 15 years ago, and it’s a killer.

What amps and effects are you using?

At home, I have the PRS MDT 1×12 combo, and will use one for the U.S. tour with Jimmy. In addition, I’m using one of three different tube preamps depending on my mood; the Mesa-Boogie V-Twin or the Seymour Duncan Twin Classic, and I always carry a ZenDrive 2 preamp in case of a breakdown. The new live album was cut with the Mesa-Boogie, and I also use an MXR delay and chorus. I’m working constantly on my tone – it’s a never-ending journey.

You’re 75 years old, but your guitar chops are as fast as ever. Do you do anything to keep your hands in good playing condition?

It’s probably a lot to do with genes; my mom was a violinist, but a happy mind is definitely part of the situation. Some of this is down to many years of inner reflection and meditation, and a healthy lifestyle. I’m swimming almost every day, and hike and bike in the mountains. Of course, I can’t keep my hands off my guitar – I have to play every day, not to practice, but just for the deep pleasure I get from playing. There’s nothing like it.

When you were a session guitarist in the ’60s, you gave lessons to Jimmy Page.

We would often meet during pop sessions in one of the London studios; I must have been 19 when I met Jimmy, who is younger than me. I would never consider myself to have been his teacher, but I showed him some of the things I was doing with the guitar. Another one of his colleagues, John Paul Jones, was in an R&B soul band with me and I helped him with his harmony studies. Guitarist Big Jim Sullivan was the star on the session scene, but a sweet guy and great guitarist.

Fans are thrilled that you have co-guitarist Jimmy Herring on the upcoming “Meeting of the Spirits” tour.

I heard Jimmy some years ago, and was immediately impressed with his playing – he’s got something truly special. Then someone sent me his recording of one of my tunes, and he played a solo that killed me. This tied in with my desire to bring back some of those Mahavishnu tunes for the U.S. tour, and it was just a matter of time before we would get together. I know we’re gonna have some magical nights on the road.

Between Gibbons and Holdsworth