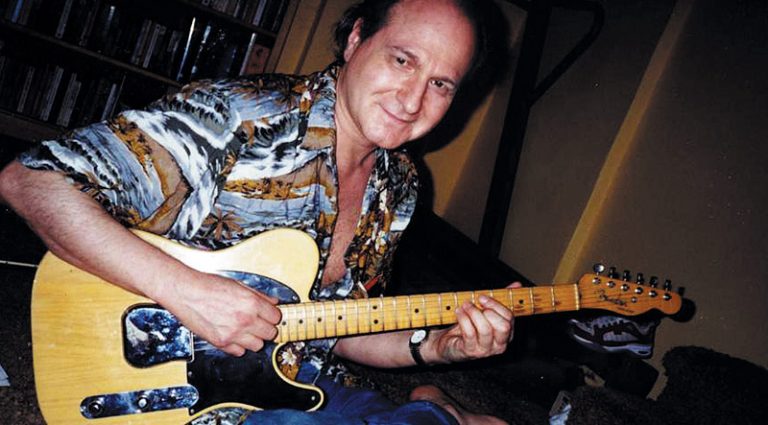 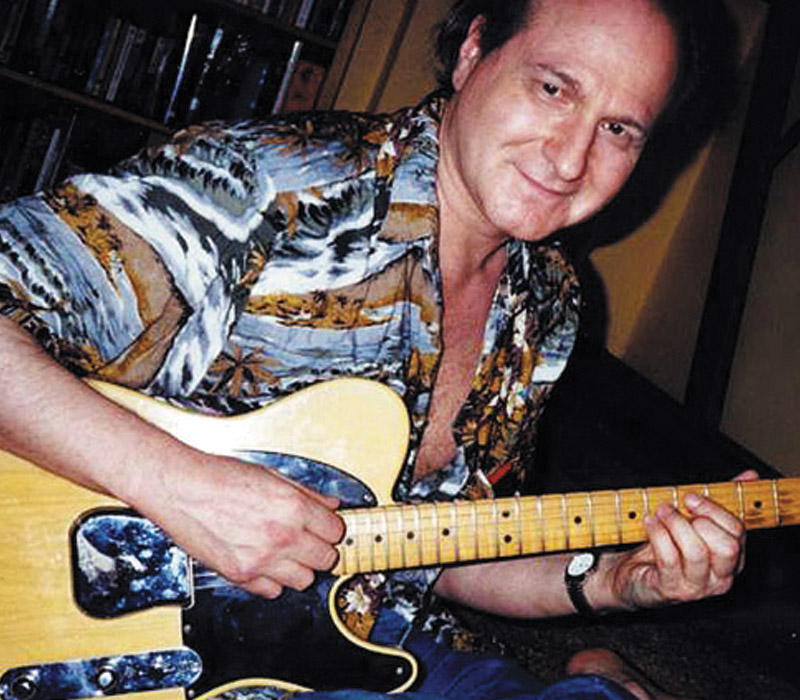 You know what happened: discretionary income for the first time and the rise of the indies with things that the majors laughed at. Just like Gibson laughing at Leo at the 1950 or ’51 NAMM show. But they got pretty scared by late ’51 and ’52 because Gibson was calling up Les and inviting him back with that broomstick of his (laughs).” – Ted Greene commenting on the incipient stages, and later proliferation of rock and roll.

Perhaps Ted Greene knew more about the cultural impact of music than anyone. His synergistic and comprehensive knowledge of guitar, music and culture made him the go-to guy for many of the world’s best guitarists whom he would mentor and inspire to realize their gifts. “Call it what you will,” Ted said, “I can guide and facilitate, but everyone is his own teacher.” That was typical of Ted’s modesty and penchant for realistic assessment, but he reached his students because he was unbiased and non-judgmental and saw the merit and importance of every musical art form be it rock, jazz, surf, salsa, classical or klezmer. “Great music abounds everywhere,” he would say. Greene’s longtime friend, producer Tom Bocci, an industry veteran with impressive music biz credentials, assembled a roster of disparate artists, all superb guitarists, eager to pay homage to Ted via performance and prose as each. The project is titled Ted Greene Remembered, and in the accompanying booklet, all of them express discriminating sentiment without sentimentality. 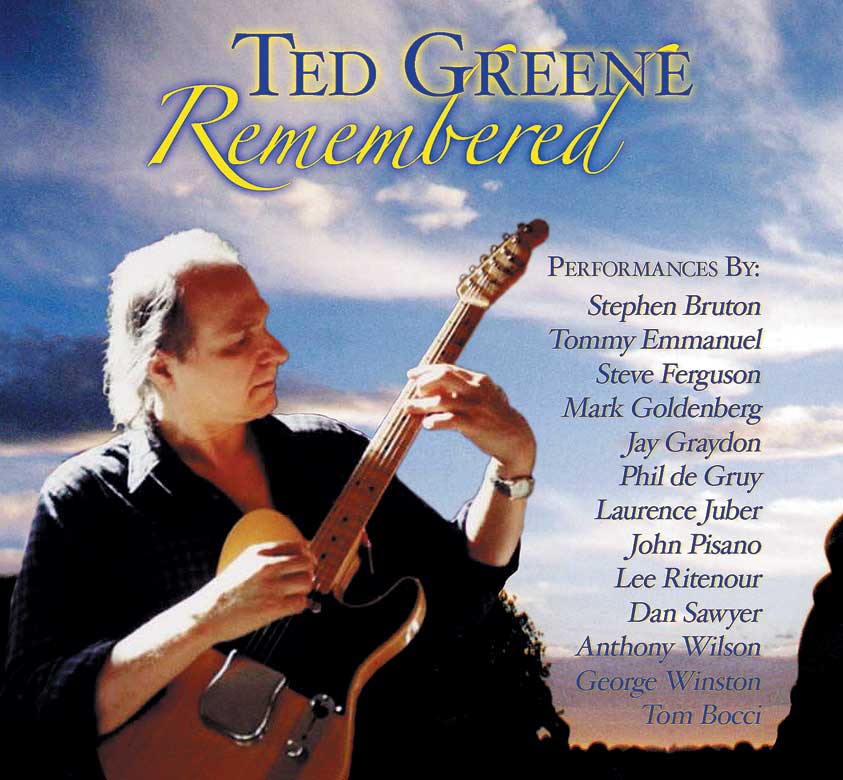 The tribute begins with Tommy Emmanuel’s enthusiastic rendition of Michel Legrand’s, “Watch What Happens” showcasing the guitarist’s flair for dynamics. Tommy laid down lively bass and rhythm tracks, then added the lead line with his Maton BG 808 flattop creating a tone reminiscent of Django’s Selmer or Chet’s Del Vecchio. He embraces the tune and explores it with his usual verve and authority then, with a little tip-of-the-hat to Jerry Reed, scats in unison with his solo en route to the coda.

One wonders if Tommy read Ted’s comment about Jerry Reed: “If I have one all-time favorite influence that grows in time as far as my over all musicianship, it’s his impact on me as a kid. He is the Ray Charles of the guitar.” Fingerstyle virtuoso Laurence Juber delivers an engaging, imaginative and complex arrangement of the Gershwins’ “A Foggy Day.” Moreover, it’s Juber’s acknowledgement of Ted’s suggestion to explore the tune in the keys of F, D and Bb. Juber said, “It was very important to me in doing this to try to capture some essence of Ted, who musically had a fearless approach to the guitar… I did this at the end of a session at Capitol because I wanted it to have a spontaneity and be true to the spirit he was communicating.” Lee Ritenour’s, “For Ted” is a poignant, graceful and haunting elegy. His exquisite technique on nylon-strings aptly complements this reverent and pensive piece.

Ritenour had demonstrated his esteem for Ted by eulogizing him at the memorial celebration, but this composition speaks volumes.Dan Sawyer offers his lush version of “It Had to be You,” because Ted once praised him on the arrangement. Sawyer also chronicles a humorous account of their first meeting and provides insight that helps us appreciate Ted’s multi-faceted musical brilliance. In a 2004 interview, Ted said that he considered Sawyer, along with Jay Graydon and Randy Resnick, one of the real legends of the L.A. guitar scene. “Bring,” is a clever piece by session player Mark Goldenberg, the extraordinary guitarist with Jackson Browne and Ted’s former student. The tune, played in C-F-Bb-E-Gb-C tuning, has a down-home motif that grabs your attention and moves through some cool changes. Goldbenberg’s compositional chops and protean sound from his Howard Roberts Epiphone are no doubt indicative of why he is one of today’s most in-demand players.

Anthony Wilson graces us with a multi-tracked and inventively layered arrangement that’s dissimilar to anything I’ve heard him create before. Wilson also recalls Ted with a number of vignettes including watching him impressively transcribe a George Van Eps performance in real time. “Ted will always remain my mentor,” says Jay Graydon, the guitarist best known for his famous solo on Steely Dan’s “Peg.” “He changed my life musically and personally. I am one of so many people he educated…” Graydon’s soulful “Star-Spangled Banner,” an arrangement Ted loved, serves as a fitting lament here. And you can almost hear Ted yell, “Play ball!” Phil de Gruy is too far under the radar in proportion to his enormous talent and is no doubt today’s foremost exponent of the harp guitar, or “guitarp.” He’s taken the instrument into new dimensions of artistry and his captivating medley of “Who Can I Turn To?” and “My Romance” will convince any pro he’s one of the most astounding talents to ever touch strings.

Two fine pianists pay tribute to Ted with their guitar playing on this collection. Steve Ferguson’s haunting “Midnight Greene,” a memorable motif reminiscent of a 1950s Laurindo Almeida composition creates a mood that’s at once mysterious and nostalgic. And Windham Hill’s George Winston, an avid Hawaiian slack-key fan, submits an understated fingerstyle version of Bob Dylan’s “Farewell,” nicely done on a Martin seven-string.Ted and John Pisano comp and romp on “Theo’s Rhythm ’n Blues.” Pisano said that Greene was his closest encounter with a musical genius. And Ted’s respect for John was boundless. He said, “I don’t really teach John. He has such great, great ears and doesn’t conceptualize music… He just plays.”

Stephen Bruton, composer of the atmospheric and wistful “Spirit Lake,” said, “I remember leaving Ted’s apartment one afternoon so excited that I went to my car and worked on what we’d been discussing during the lesson… this song wrote itself right there on the spot. The inspiration was pure Ted.”

The final track pairs Ted and Tom Bocci creating an environmentally- oriented piece entitled, “Vanishing Voices.” “To eliminate a 60-cycle hum, Ted literally grounded himself by running a wire from his body to the floor using duct tape,” Bocci laughed, “Which proves once and for all that Ted wasn’t wired like the rest of us.” Merlin’s Multimedia engineer Aaron Anderson superbly mastered this compilation, which would be a valued addition to any musician’s library. Each guitarist here now shares a bond with his peers in paying homage to one of our most brilliant and influential artists. And I’m sure Greene’s practical philosophy resonates among them: “You can’t learn everything and you can’t be great at everything, so make your highest priority stuff your stuff, and just live on with your hands clapping for the rest.”