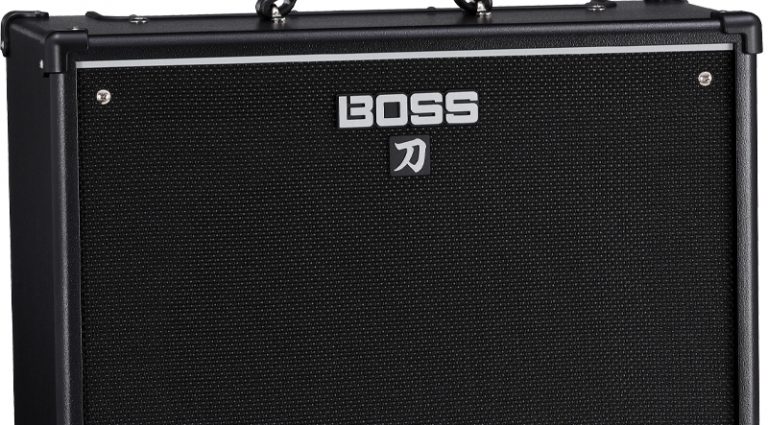 More and more, guitarists’ passion for tube amps is being balanced by the rise of quality digital, solidstate, and modeling amps, and for good reason – they’re often inexpensive while packing a huge range of features. The Boss Katana series is an interesting combination of price and tone in this category.

The Katana 100 has a custom 12″ speaker and a control panel broken down into four sections. The first gives up the channel Gain and Volume, as well as a selection dial to find the general type of tone you want among five available “characters” – Clean, Crunch, Lead, Brown, and Acoustic (for acoustic/electric guitars). A three-band EQ section is essential for controlling the vagaries of solidstate amps, followed by an Effects section and the power section with Presence, Master Volume, and a Power control.

The Katana 100 offers effects that can be used simultaneously. On the control panel you can access nine effects via three knobs and colored LED buttons labeled Boost/Mod, Delay/FX, and Reverb. It’s really easy to access the effects; 7 o’clock to noon accesses the first effect, and noon to 5 o’clock brings in the second. Boost provides distortion and overdrive (including Boss Blues Driver and OD-1), while Mod kicks in the chorus, flanger, and phaser. Delay covers three levels of echo simulations – digital, analog, and tape – while FX delivers Tremolo, T-Wah (for that Jerry Garcia tone!), and Octave. Reverb offers Plate, Spring, and Hall sims. Again, this is all from just three knobs and buttons.

Katana amps also have USB outputs to access the Boss Tone Studio effects editor via computer. Hooking the amp to a PC or Mac also allows downloading new sounds from the Tone Central website and tweaking up to 55 customizable effects. There are 15 default effects and you can use three at once. The best part is that you can save the effects, tone, and EQ settings for instant recall using the Channel Preset buttons. Players can purchase a separate Boss GA-FC foot pedal to access sounds quickly at gigs.

The Power Control adjusts output from 100 to .5 watts. There’s a tilt stand for monitor and sound projection (which should be offered on more amps), and the Katana 100 weighs under 33 pounds, making it supremely easy to carry.

Plugged in, it’s a beast, offering everything from clean and twangy to full-on metallic glory. The critical piece of the sound puzzle is the 1×12 combo’s excellent bottom-end; in general, “fat” is always better. Even its mid-overdrive tones have a degree of power-amp interactivity and more “air” than most boxes in this category.

The kicker, though, is that Acoustic setting, which makes the Katana 100 the perfect gig amp for both a rock set and the unplugged set right after. No more lugging two or having to plug the acoustic/electric separately into the PA.

The Katana offering so much under one hood makes it hard to quibble. If anything, its tone is a bit bright, but keeping the Treble on the low side helps. And you can’t argue with its overall sound and good-to-excellent effects. It’s certainly a “leave your pedal board at home” amp with impressive amenities.