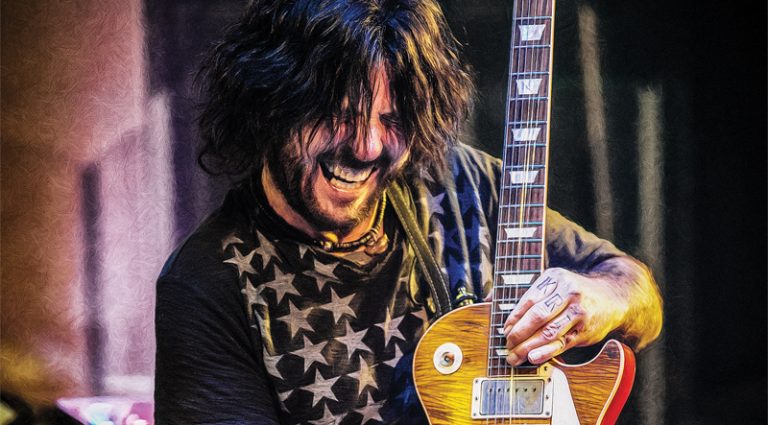 The hair/glam metal movement of the ’80s spawned its share of guitar shredders. One often overlooked is Tracii Guns, whose fleet-fingered work was a highlight of the first three albums by the band he founded, L.A. Guns. He recently added to his resumé with the release of The Missing Peace, the first L.A. Guns album in 15 years to feature Guns together with singer Phil Lewis.

How does The Missing Peace differ from earlier L.A. Guns albums?

Twelve more years of practice, 12 years of stockpiling ideas and recordings of stuff I didn’t use in other projects. L.A. Guns is super-diverse, musically, from album to album, but it does have a tonality – a personality – that I took for granted for the first 10 years we were making records. And I had a lot of help from a friend, Mitch Davis, who I’d written music with for some other stuff – film, TV, and commercials. He wrote a couple songs on my solo albums, and came with the lyrics for this one. I introduced him to Phil, and they got together and put all the melodies and lyrical ideas together. So, it’s really Mitch’s brainchild, and we worked hard as opposed to, “Hey, let’s write songs and hopefully the recording will make them great.” They started out great. I think it was the whole experience – studio, songwriting, being outside of the band long enough to look in and see what it’s really about. I couldn’t be happier with this record. There’s not one thing I would’ve done differently.

Which guitars, amps, and effects did you use?

Mostly my friend’s 2011 Les Paul ’59 reissue because he was doing some modifications on my R9. It happened that I tracked guitars at the time he was doing mods for me, so I borrowed his, which has Bare Knuckle pickups. The magic really came from amp setup – mainly a Bugera – and Mooer pedals was developing these preamps and sending them to me. The ones I used most was their UK Gold 900 and their Brown Sound. Most of the rhythms are the UK Gold pedal going right into the effects loop of the Bugera, through Marshall 2×12 cabinets. When it kicks into the more-neoclassical-metal stuff, I went to the Brown Sound. I didn’t record any delays – all that was printed after.

I also have a Magnatone Twilighter Stereo amp I used for a lot of the clean stuff. With that, I just plugged in direct; it’s got the best reverb sound in the world. On the ballad, “Christine,” there’s a ’74 Fender Super Reverb that has a really nice low tremolo effect. On some of the solos, I experimented with the Mooer pedals, particularly one called Grey Faze Fuzz, which is this really unique, psychedelic, Yardbirds-fuzz kind of sound you can hear throughout the record. With that pedal, I used a Japan-made ’62-reissue Strat that Phil gave me.

Have you embraced new recording software and technology?

Yes. On “The Flood is the Fault of the Rain,” I was trying new software on my iPad; I actually recorded organs and guitars directly into the iPad, then transferred them into Protools, intending to change them later. But they sounded fantastic, so I left them. On that song, there’s actually a lot of iPad plug-ins making the sound, which is further proof that I probably don’t need all the stuff we love, hug, and that clutters up my studio. And I hate that, but the software is really simple to use. It’s unfortunate, though… I listen to a lot of songs where people have done their own recording, and while they don’t sound like demos, they sound like something other than records. It’s interesting to me how people don’t use the tools that are available to teach them very quickly how to go from sounding like an amateur to a professional recording. It’s so simple. Apogee has a video series online that breaks down stuff in the recording universe – five-minute videos that make all the difference in the world.