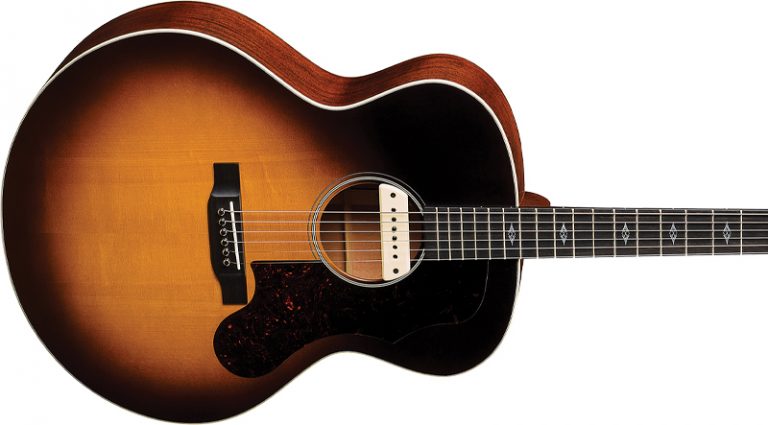 Which new Martin is based on a vintage-reissue with a pronounced low-end? Noooo, the model designation does not begin with a D!

The CEO 8.2E finds inspiration in the Martin Grand Jumbo introduced in 2009, with a distant ancestor in the similarly shaped 1979 J-35E. It’s one of several recent designs issued as part of Chris Martin IV’s personal contribution to his company and family legacy.

The 8.2E shares a pillar of Martin’s flagship D models: a strong low end. Not unlike the oft-copied D-18, there’s an acre or two of perfect mahogany. Meanwhile, the European spruce has undergone Martin’s proprietary Vintage Tone System, which allows them to fine-tune the top to characteristics it might have after aging since the 1930s (not coincidentally about the time big ol’ flattops became a thing). Shiny “liquid metal” bridge pins, with a molecular structure that can add four decibels to the amplitude of a flattop guitar, hold down the nickel alloy Martin Retro strings gauged .012 to .054.

Other features include the same headstock as that on the Martin CF-1 archtop. Enclosed repro vintage-style tuners with amber buttons are a nice lightweight complement to the oversize headstock, helping balance the guitar, which is ergonomically important with such a big instrument.

Speaking of… the body width is 17″, just 1/8″ longer than the CF-1, though it’s much deeper at 4″. And with its Bourbon Burst finish and deep-waisted curves, the CEO 8.2E has a big-time archtop-y vibe. Black and white body binding, diamond/skeleton-pattern inlays, and a bold mother-of-pearl headstock logo all add to a gorgeous, distinctive acoustic.

That big expanse of spruce and mahogany offers a ringing sound when hit with a set of fingerpicks or a stout plectrum, and it sounds very different when heard from in front. The response is a bit shy with bare fingers, but the 8.2E is set up with a hard hitter in mind. Even the oversize pickguard suddenly made sense: it was right in the path of a guitar pick smacking out the intro to “Bye Bye Love” with a good right-hand flourish on the ultimate downstroke. The tight-waisted body design offers a loud and profound but very different response than the oft-imitated Martin dreadnought. Tuning to open G, the ringing common tones of D and G are forceful but not overwhelming. Both a solid open-chord strummer and an aggressive blues fingerpicker will find their match in this stalwart. The ebony fingerboard is 25.4″-scale, and the 1.75″ fingerboard nut width and modern neck that Martin has adopted for many of its new models is comfortable, though wide for smaller hands.

Plugging in the Fishman Blackstack pickup through a Fishman tower in a small club and playing with a lighter touch sounded even across the strings, facilitating a pianistic fingerstyle. Effort was put into setting up the electronics, as the CEO 8.2E has a high feedback threshold, with the low-end boom that often characterizes amplified acoustics easier to control.

The Blackstack is a quiet passive humbucker requiring no batteries, and is designed for acoustic strings. Though not every player will like the aesthetics of the soundhole-mounted Blackstack, Martin simply found the best-sounding pickup for the guitar and gave it the Nazareth touch with an ivoroid cover to match the binding and heel cap.

Martin’s various 0 models are so versatile, and the D’s are known especially for their bluegrass applications. OM models, meanwhile, are prized for the extra drive the longer scale gives them. But the CEO 8.2E has its own personality – and that big Martin sound.