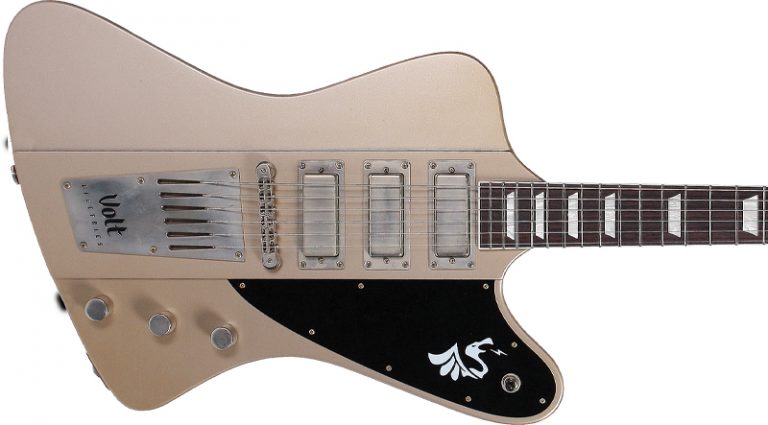 From Johnny Winter and Stephen Stills to Scott Holiday, the Firebird has been turning heads since the early ’60s. Builders Sander de Gier and Ewout Nijman out of the Netherlands are two guitar freaks with a jones for old-school looks and modern appointments. They have a thing for Firebirds too.

Their first series for Volt Electrics is a tribute to that venerable guitar. The #004 Reverse features the same cool backward Ray Dietrich design, but with some nifty modifications. The review model came in Shoreline Gold Metallic with light aging. Rock solid, its flawless nitrocellulose lacquer finish, retro styling, and workmanship, will encourage hours of boutique-level quality note density. The guitar’s light weathering and cracking is subtle. Tiny scratches and dings on its mahogany body and an aged matte patina on the nickel hardware give the #004 a mature appearance.

Its bolt-on one-piece maple neck comes equipped with a small wrench, and the rosewood fretboard, 22 Jescar 55090 frets, and Gotoh tuning pegs combine to make this a special instrument. With its clean block inlays, compound radius, medium C neck, 25.2″ scale length, and 1.67″ at the nut, the Reverse #004 is geared for players who like a handful. It sports a Master Volume knob, two Tone controls, three Lollar Firebird pickups, and an ABM tune-o-matic bridge. A black headstock gives the overall look a finished appearance.

Running through a variety of rigs, the Reverse yields classic colors with a mix of nasal spankiness and bite. It runs the gamut from hard rock to jazz, and the upscale pickups have enough complexity to handle any measure of saturation. The three-pickup configuration offers a plethora of tonal variation, and the overall feel is solid, consistent, and inspiring. From ’60s rock to modern heavy rock, the Volt Reverse is a special guitar that improves upon an already great design.