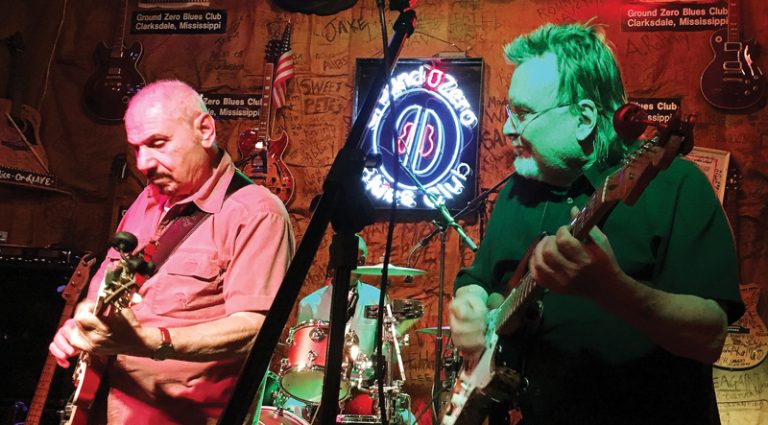 Five decades after their bands first charted with hit singles, two guitar legends recently reunited for a sojourn to the Mississippi Delta, birthplace of the blues.

Mark Landon was a member of the Music Machine, which charted with “Talk Talk” in November, 1966. He later played with the Ike and Tina Turner Revue. In mid ’67, “Incense and Peppermints” by the Strawberry Alarm Clock soared to #1. Ed King was lead guitarist for that band, and later joined Lynyrd Skynyrd for its first three releases. The two became casual friends when the bands shared a few billings and later would see each other at Hollywood clubs or recording studios. Landon eventually left music and for more than three decades worked as a Hollywood makeup artist. After retiring, he got back into music and relocated to Austin. King returned to Skynyrd when the band reunited a decade after the infamous plane crash that killed three members. He departed again in the mid ’90s and is now retired while living in Nashville.

The two recently reconnected via social media after King posted photos of a visit he’d made to the Mississippi Delta. Landon, who’d played with the Turners in Ike’s hometown of Clarksdale, had long wanted to return. He reached out to King, and the two planned a pilgrimage to see the region’s historic musical sites.

“Ed may not have used that term, but I sure did!” he said. “I had a quadruple bypass last year, and it sharpened my focus.”

The two were accompanied by Ed’s wife, Sharon, guitarist Andrew Cohen, and Delta-blues historian Scott Coopwood, who served as guide. King and Landon each brought guitars, hoping to catch some mojo – King a ’54 Les Paul and ’59 Strat, Landon a guitar custom-built to the specs of a 1950 Broadcaster, along with an Ibanez Artist 420.

The itinerary included stops at the Delta Blues Museum as well as Clarksdale’s Shack-Up Inn, which for decades has hosted traveling musicians. They also found the former location of the Mose Swing-Inn, where Landon had played with the Turners. One evening, Landon, King, and Cohen sat in with a band at the Ground Zero Blues Club, owned by actor Morgan Freeman.

Clarksdale is the location of the “Crossroads” at Highways 61 and 49, where folklore has it Robert Johnson sold his soul to the Devil for fame and fortune. Coopwood also showed the group an alternate intersection further south, between Cleveland and Ruleville, near the site of the Dockery Plantation – a gargantuan cotton farm and sawmill that was key to the development of the blues. Other stops included the Grammy Museum and the Airport Grocery restaurant, where they sat in on a low-key jam.

The B.B. King Museum and gravesite was a mandatory stop in Indianola, as was Rosedale (cited in Robert Johnson’s “Cross Road Blues”), an alleged gravesite of Robert Johnson, in Greenwood, and the Po’ Monkey’s Lounge, near Merigold, which Landon described as “…an old-time blues juke joint filled with atmosphere and history.

“The Delta is like going back to another time,” he added. “The look and feel is truly Americana; it’s not all wine bistros and lattes. The people are friendly, and history is everywhere.”