Anyone with a taste for real country music – in particular, Western swing – will recognize this guitar. Even though Asleep At The Wheel leader Ray Benson quit using this early-’60s Gibson ES-355 in about 1985 (and eventually sold it), it’s the guitar fans inevitably associate with him – and, with a Lone Star Beer sticker displayed proudly on its face, as iconic a Texas image as Bob Wills’ Stetson and cigar.

In 1989 or ’90, I helped Ray sell the famous Gibson to the Hard Rock Café. One day I was shocked to see it hanging on the wall of Ray Hennig’s Heart Of Texas Music in Austin. “I decided I had to sell it, because I was broke,” Benson recalls.

I had met Steve Ruthier, then-curator of the Hard Rock’s collection, and figured he’d be interested in it – and would likely pay more than a player off the street. “You said, ‘Hey, you can get a couple-three thousand dollars for this,'” Ray continues. “So I sold it to the Hard Rock for $3,300, and gave you a commission. You were broke; I was broke – great deal!”

The guitar is now back on the wall in the offices of Asleep At The Wheel – surrounded by the accumulation of the band’s 37-year, eight-Grammy history. But before we get to how he reacquired it, Ray details how the guitar first came into his possession.

“I bought it in 1972 from a guy named Glenn Keener. That was when our first album came out on United Artists. He had played bass on our first demo, before we got a record deal. I paid him $500, and he told me it was Leon Rhodes’ old guitar.”

In the 1960s, Rhodes played lead guitar in country legend Ernest Tubb’s jazzy Texas Troubadours, in addition to racking up session credits with Waylon Jennings, Reba McIntire, George Strait, Lefty Frizzell, Porter Wagoner, Billy Jo Spears, Willie Nelson, and Ray Price. “Leon was one of my heroes.” Benson enthused. “I loved the Texas Troubadours, with Leon, Buddy Charleton, Buddy Emmons, Jack Mollette, and all those great guitar players. Billy Byrd was the one who set the style, but he wasn’t a hot player like Leon; he was just great.” 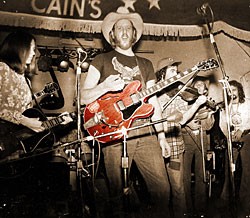 Ray’s memory is that the guitar is a 1960 or ’61. “When I bought it, it was super-fast,” he points out. “The frets were filed flat. I had Michael Stevens re-fret it, back when he and Larry Jameson had Guitar Resurrection in Oakland, before either of us moved to Austin. The Varitone had already been disconnected when I got it. So it’s mono, and is basically a 345. A roadie changed one of the old pickups when it gave out – and threw it away, unfortunately – but it’s still got one of its original PAFs.”

Benson stopped taking the guitar on the road in the mid ’80s. “Then I got brand-new guitars from Gibson, and went to the ES-347 and ES Artist. About ’85 or ’86, I decided I needed a little more sting, and went back to the Tele – which had been my main axe prior to the 355. I always wanted a Gibson, but after a while I wanted more treble. I probably wanted two guitars, but it’s easier to make a Tele sound like a Gibson than to make a Gibson sound like a Tele.

“But I used it on pretty much every Asleep At The Wheel gig from ’72 to about ’85,” he continues. “I retired the 355, because it was an old guitar, and I didn’t want to bang it up. I’d already worn the finish off the back with my belt buckle. I was playing the Artist, which was great, because it had active electronics, and you could get a little more treble. I continued to play Gibsons, but then the company started going downhill, and by the mid ’80s I didn’t know anybody there anymore. So I started playing Teles.” 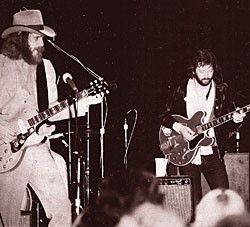 According to Benson, his namesake Samick/Valley Arts STR-100 model “has an extra half-inch all the way around, so it gives the body a bigger sound. More body means more low-end. Plus, it has a humbucker in the neck position, and it comes with various middle pickups. The prototype had a Hot Rail in the middle, with Seymour Duncan Classics for the humbucker and bridge pickup. The body’s contoured, and the neck is bigger than a standard Tele.”

The 335 originally hung in the Dallas Hard Rock, but was moved when the chain opened an Austin branch in 2002. Of parting with his road partner of a million-plus miles, Benson says, “I didn’t mind, because I hadn’t been playing it, and I used the money to build a really nice house. Then I went to the Hard Rock one day, and there it was, on the third floor, basically hidden. All the heat and smoke goes up there, and I could see through the glass case that it was rotting. Jeff Skilling was working for the Hard Rock, and I told him the story; I said, ‘Man, you think I can get that back from them? It just hangs there.’ So he said he’d work on it, and six months later he worked a deal where I traded the Hard Rock one of my signature Samick/Valley Arts Teles – a really nice, custom-made guitar worth about three grand – for the 355.”

But there was one slight hitch. “I said, ‘I’ll come down and get it,’ but they said, ‘No, it has to be shipped back to Florida.’ They shipped it back to Florida, and it sat around for three months. Finally it arrived. And three weeks later [in January ’06], the Hard Rock closed in Austin. That thing would have gone into the great black hole of the Hard Rock archives.”

Pulling it off its wall hanger, Ray smiles, “It’s wonderful to have it back. I still get it out and play it.”

The 6’6″ Benson points to a framed picture of himself onstage, towering over none other than Slowhand. “One time, Eric Clapton came down and played with us in Atlanta, so he played it. A lot of people have played this guitar.”

This article originally appeared in VG‘s Aug. ’07 issue. All copyrights are by the author and Vintage Guitar magazine. Unauthorized replication or use is strictly prohibited.