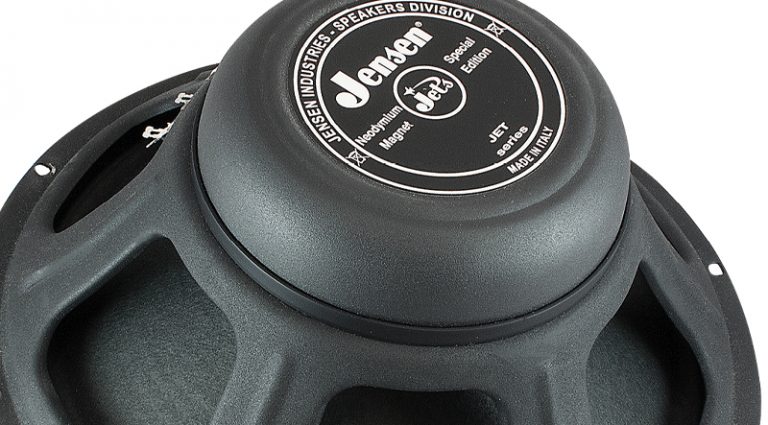 Jensen has been in the speaker game for a very long time and its wares are some of the most sought-after vintage drivers. The company’s new 12″ Tornado Stealth series stands as proof it remains aware of the fact guitar players want not only to create sounds they’ve heard on their favorite songs since the ’60s, but also want to invent unique sounds of their own.

The 65-watt version offered beautifully rounded lows that were punchy and quick to respond to transient changes. The mids were airy and sweet, and the highs had a warm, slightly rolled-off attack characteristic. With a bit of overdrive, it sounded gutsy and warm, with a low-mid grunt that gave the highs room to breathe and expand, with a kiss of compression to top it off.

In comparison, the 80-watt had more air and brightness in the high mids, with tighter, more-controlled lows. The mids were punchy and present with a softer attack transient. With overdrive added, it took on a bright, Champ-like feel… if Leo had made the Champ a 1×12 combo. Of the three speakers, the 80-watt offered the most cut, with a healthy amount of compression to help it stand out in the mix.

Finally, the 100-watt felt rotund and laid-back in the lows, with ever-so-slightly scooped mids. The highs were punchy and warm – the character of the speaker was not unlike the distant cousin of a Bassman –  big and relaxed transients that slosh around beautifully while sticking to the playing dynamics. With overdrive, pick and playing attack were more accentuated, with harder picking belching out striking and bold tone.

Note, too, that Jensen designed the Tornado Stealth with neodymium magnets, which are incredibly light, so you’ll find it surprising easy to lug a cab up a flight of stairs when it’s loaded with these.

The Tornado Stealth is truly a pleasant surprise from one of the old masters of speaker design. While maintaining the same base tone, it offers different flavors, each with unique strengths that sound and feel incredible to play. If you are in the market for new guitar speakers, the Tornado Stealth gets high recommendations.