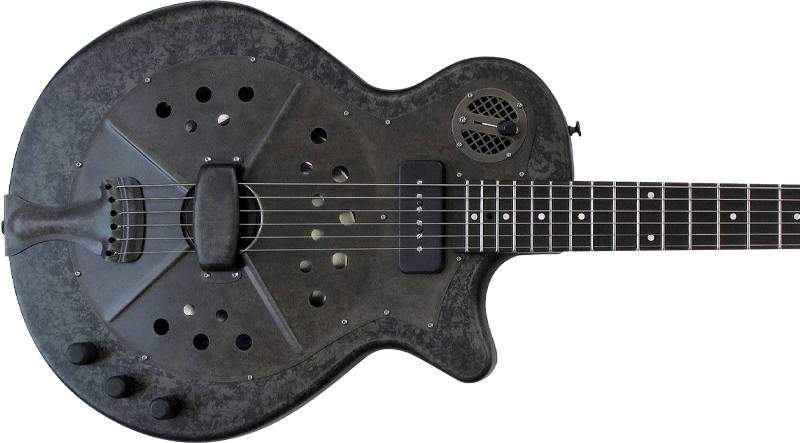 What do you get when you cross a National Duolian with a solidbody electric? Answer: a guitar that Elmore James would have sold his soul for.

National’s new Pioneer RP1 is that devilish creation. No one’s built a guitar quite like this before.

The Pioneer boasts the steel body of a 1930s Duolian straight from a Delta juke joint. But it’s built in a thin style, with a shape and size akin to a Les Paul. Finish choices include National’s Chipped Ivory or Black Rust. The hardware has a fittingly cool rubbed-steel visage, from the Gotoh machine heads to that distinctive National tailpiece of yore.

The centerpiece of the body is, of course, the resonator cone, set safely not behind an old-style “hubcap,” but a full metal cover plate. And the real sign of this guitar’s singularity? You can play the Pioneer acoustically, you can go electric, or you can opt for a blend of both – which is where the magic lies.

The RP1 features two pickups: one you can see, one you can’t. The obvious neck pickup is a Lollar P-90, a great choice for this guitar’s vibe. It captures the strings’ sound, of course – and snarls like a junkyard dog hit by lightning, offering a growl ideal for deep blues or primal rock and roll.

Hidden away beneath the bridge is a Highlander piezo that picks up the unique voice of the resonator. Select just the piezo with the three-way toggle and you can play acoustic-electric, as if you were miking the cone itself. The sound is an accurate amplification, suitably raspy and soulful.

But, blend the two pickups with the aid of the Pioneer’s onboard active electronics and you get the whole deal – P-90 raucousness and that unique National resonator razor-edged voice.

The neck is maple with an ebony fretboard and a 25″ scale. And with its slim, comfortable profile, it’s as playable as a Les Paul, too.

And that’s a good thing, because the Pioneer inspires you to do more than just slide. You can get Elmore James’ sound, certainly, and that smooth fretboard is lovely to play bottleneck on. But the neck and the pickup options will also push you to use the RP1 in ways you might not have expected.

With the P-90 active, you can dive into blues or rock riffs with a solid bottom-end grind. Tweak the Tone control, and you can go from bass-y to a cutting treble. In fact, the neck’s so nice, you can shred on this guitar – not something you can say about most 1930s Nationals.

Switching over mid-song or within a solo to the blend of P-90 with resonator piezo is the coolest thing. That electrified resonator combo sound is unique and wondrous, and it makes you question what we’ve been missing all these years.

Kudos to National for its farsightedness in voicing the Pioneer. They didn’t just go for the obvious blues tone, but instead created a guitar with a flexibility that will inspire you to play it more and more, harder and harder.

Our only suggestions might be to alter the orientation of the pickup-selector switch to be up/down for more ease in quickly swapping between options while playing. And we’d replace the stock strings with a heavier gauge or flatwounds – ideally, both. This would further enhance the Pioneer’s unique natural tone and broaden its sonic range. But those are both obvious minor things that can be changed easily.

National has created something new and special in its aptly named Pioneer. And you don’t need to sell your soul to own one.