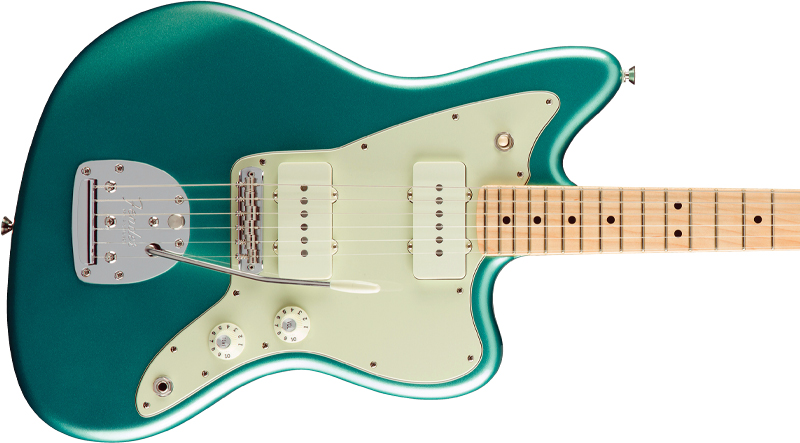 From the get-go, Fender’s Jazzmaster was the black sheep of the family – that wild-at-heart uncle your ma warned you about. Happily, it’s happily back in the lineup with the American Professional model, part reissue, part refined modern guitar.

The original Jazzmaster was unveiled at NAMM in 1958 as Fender’s flagship – the upmarket big brother to the Stratocaster. Its offset waist, “soapbar” single-coils, floating vibrato, and the Rhythm Circuit slider control all set the Jazzmaster apart.

Originally aimed at sophisticated jazz players, it was never really embraced – until rebellious surf guitarists the late ’50s and early ’60s found that sound within the guitar. More recently, the Jazzmaster has garnered fans among the hip and the underground, from Tom Verlaine and Elvis Costello to J Mascis, Nels Cline, and Sonic Youth’s Thurston Moore and Lee Ranaldo.

American-made Jazzmasters have been only sporadically available since 1980. Fender has offered good Japanese reissues, Mexican versions, signature models, and more, but it’s great to welcome back the American-made version, alongside Fender’s American Vintage ’65 Jazzmaster – and with two new colors that are just right and will be tough to choose between.

The new Jazzmaster sings through Michael Frank-designed single-coil V-Mod pickups that are overwound for a hotter tone while retaining a vintage warmth. They’re controlled by a treble-bleed circuit via a Master Volume that holds onto the high end when lowering volume to reduce gain, thus keeping the tone no matter where the Volume knob is set. And that Rhythm Circuit slider is now a thing of the past.

That famous floating tremolo/bridge has been refined to be more stable while still allowing you to rock the whammy all you want. You can dial in the arm tension better than ever before. And gone are the old problematic bridge saddles; in their place are brass Mustang saddles – exactly what almost every Jazzmaster master swapped in anyway.

The neck is a new modern “deep C” shape that Fender says is designed for comfort and speed. It’s topped by a bone nut and 22 narrow-tall frets that are supposed to make for easier bending of strings.

Color choices? You can pick classic three-color Sunburst or Olympic White, both with rosewood fretboards. Or select from one of the two new hues, which seem made just for a Jazzmaster – Sonic Gray or the sure to be a hands-down fave, Mystic Seafoam. Both are accentuated by maple fingerboards. The pickguard is three-ply Mint Green with the exception of three-ply black for the white guitar.

The new Jazzmaster was plugged into a Vibro-King and dialed up a dash of reverb.

The first noticeable thing about this guitar is its fit and finish: brand new and straight from the case, it feels great and ready to go. The neck is silky smooth, the fretboard an ease to play.

The tone of the V-Mod pickups is instant surf. They have a wonderful treble bite that is at the same time jangling and sonorous while not being thin or tinny. The Master Volume treble-bleed can accentuate this when the guitar is played with the volume down. Either way, it gives added control.

The bridge pickup is hot: it’s got a vintage voice that truly speaks. The neck pickup has a bit more punch than some may remember from an original ’59. Combined, they’re good and loud and full sounding.

Fender provides the guitar with easy-to-bend .009-.042 strings, but you’ll want to swap on heavier-gauge strings, or best yet, heavier flatwounds, to really accentuate all the glorious tone of this beautiful new Jazzmaster.

Have Guitar Will Travel – 049 Dave Miner