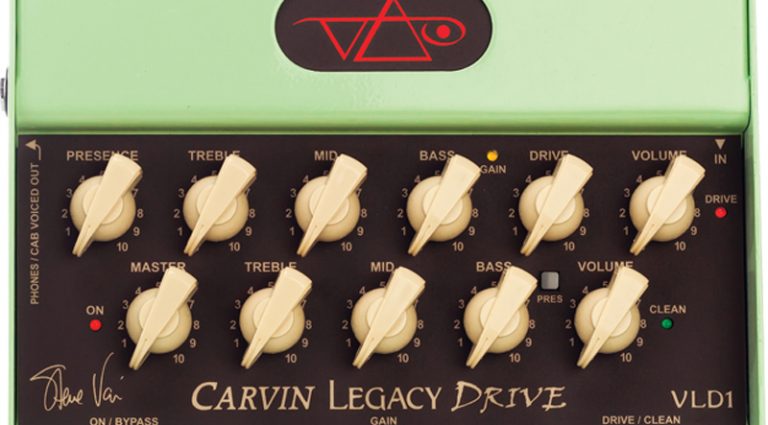 When Steve Vai needed a portable preamp to take on the road to emulate his signature amp tones, Carvin Audio obliged. Their VLD1 Legacy Drive is Vai’s Legacy amplifier in a box – and it travels a whole lot easier than a half stack.

Using 12AX7 tubes and circuitry found in Vai’s signature amps, the VLD1 unleashes thick lead tones and ballsy cleans. It’s housed in a solid metal enclosure with two-channels like the Legacy 1. With a clean and dirty channel, it also has the second gain stage of the Legacy 3, allowing you to add even more overdrive to your leads. A separate Cabinet Voiced output emulates the frequency response of a guitar speaker so you can send tones to headphones or a PA. It also has a true hard-wire Bypass and footswitch jacks for nifty remote switching.

You can run the VLD1 in front of an amp like a dirt box, connect it to a power amp, or run it direct into your digital workstation. The clean side offers chicken-head knobs for Master, Treble, Mid, Bass, and Volume, and comes with a Presence switch for added clarity. The gain side offers the same with the addition of Drive and Presence. A glowing Vai hieroglyph indicates the modes: green is Clean, red is Drive, and amber-yellow is for Gain in Drive mode.

The Carvin VLD1 Legacy Drive emits beaucoup sounds that extend beyond Vai’s sonic footprint. Easier to carry than a half stack (though too bulky for a pedalboard), the VLD1 has a dark but malleable mid-voiced character. Its vibrant upscale countenance and rich clarity make playing inspiring for the heavy rocker who loves crunch and lick-friendly saturation.