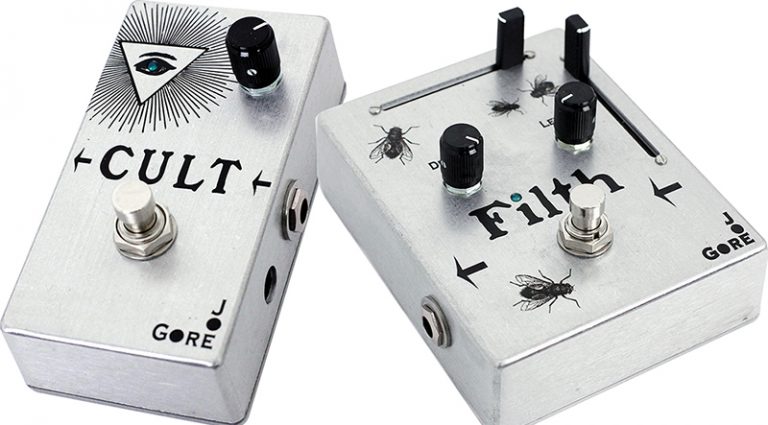 Composer, producer, and multi-instrumentalist Joe Gore’s career path has been multilayered and includes “guitar effects builder.” Two of his pedals are Cult and Filth – effects capable of great and varied tones that belie their simple layouts and designs.

One of the simplest pedal layouts ever created, The Cult has just one control knob, which increases gain. Don’t let that simplicity fool you, though – it’s one of the most flexible fuzz units imaginable. Running a ’65 Strat through the Cult and into a ’65 AC30 then playing with a variety of fuzz levels revealed that the more the Gain knob was turned up, the more responsive and dynamic the guitar’s Volume knob became, almost serving as an extension of the pedal itself.

With the Cult’s control at 3 o’clock and the guitar’s Volume on 7, the setup yielded a great rhythm sound with enough clarity to allow open chords to bloom. Turning the guitar’s Volume all the way up produced a rich-yet-natural harmonic distortion that jumped from the amp, unlike some fuzz units that sort of compress the entire signal – very important in a live setting with a band.

Like its little brother, the Filth pedal is also easy to use, though it has four controls; Level and Drive knobs increase the volume and the amount of fuzz, respectively, but what sets the Filth apart are two big sliders on the top and right of the unit. According to Gore, these alter the voltages through the pedal’s transistors, changing not only the tone but the response, attack, and compression notes.

Running the Filth through a small-box Marshall 50-watt rig, the pedal produced an amazing assortment of sounds with simple adjustments of the sliders, which interacted nicely with each other. From a ’60s “Psychotic Reaction” type of fuzz to a Santana-smooth overdrive and on to end-of-the-world Black Sabbath heaviness, the Cult pedal displayed an incredible amount of flexibility most guitarists would have no problem employing as the sole fuzz in their signal chain.

Gore’s Cult and Filth pedals are notably different from other designs in that they don’t squash the signal, but rather boost note dynamics. They are solidly built, easy to operate, and could be welcome additions to any electric guitarist’s pedalboard.