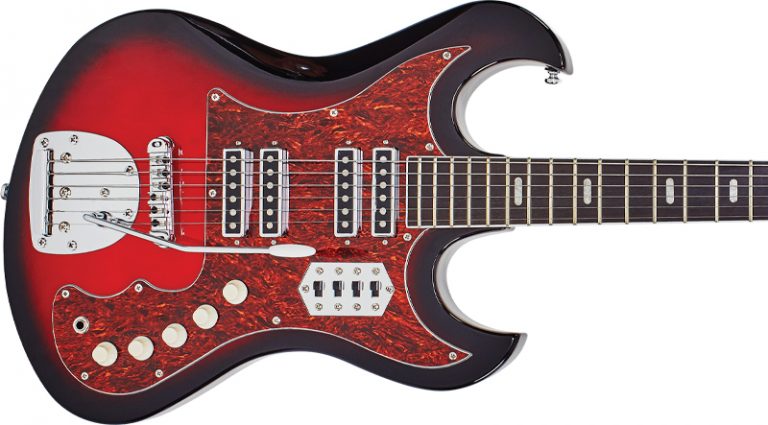 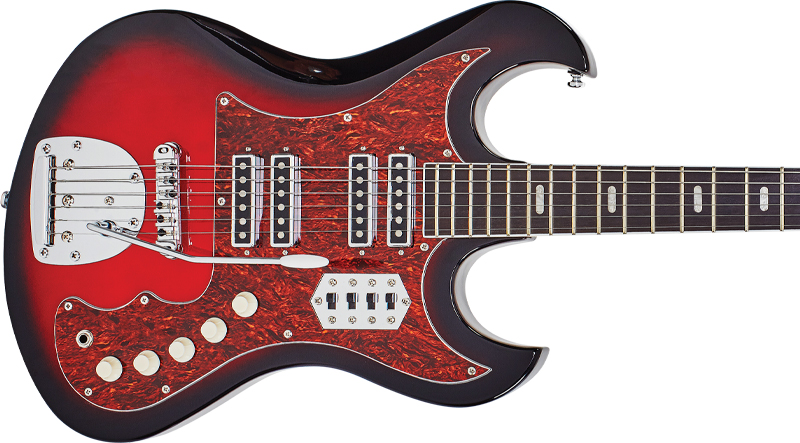 Subjective as it is, the term “mojo” usually refers to gear that’s been played-in over the years. Eastwood tries to counter that perception with their cool reissues, two recent examples being the SD-40 Hound Dog and the Classic AC.

The former is Eastwood’s take on the Kawais/Teiscos/Kingstons of the 1960s, those infamous Japanese imports with their numerous pickup configurations. Eastwood has culled some of the best features of those guitars in creating the four-pickup Hound Dog, a tribute to the guitar played by the late rowdy blues ace Hound Dog Taylor.

The SD-40’s specs include a basswood body with tortoiseshell pickguard and four single-coil pickups, each with an on/off switch (mounted on a chrome plate) and Volume knob, as well as a master Tone control. The bolt-on maple neck features 20 frets and a rosewood fingerboard decorated with Tylenol-shaped inlays, all in a 25.5″ scale. The neck is more deeply C-shaped than most Eastwoods, but comfortable. The Hound Dog’s standalone bridge and spring-action roller tremolo are of clear Jaguar/Jazzmaster ancestry.

Plugged in, the SD-40 is a blast as you combine the pickups in any sequence. Given that these are four single-coils, expect some 60-cycle hum depending on the pickup combination. However, this is the normal tradeoff for genuine vintage tone and, honestly, the combination of the first (bridge) and third pickups was twang heaven. Using a Vox-style amp and overdrive pedal, the SD-40 produced about as good a roots/blues/country tone as you’ll hear – deeply fat, woody, and resonant, with the perfect amount of bolt-on clank.

Granted, the SD-40 Hound Dog plays like a typical mid-price solidbody and its intonation requires tweaking. But compared to the original, it’s a far superior animal. Killer vintage tone like this doesn’t come along every day – the SD-40 has mojo up the wazoo.

In contrast to the button-crazy Hound Dog, Eastwood’s Classic AC is a basic rock-and-roll machine, based on the 1963 Gretsch Jet Firebird of AC/DC’s cofounder and ex-rhythm ace Malcolm Young. Like Young’s sanded-down axe (the original finish was red), the Classic AC has a natural, figured maple top on a chambered mahogany body. It sports a 24.75″-scale mahogany set neck with 22 frets on a rosewood board. And check out those shark’s-tooth inlays. Electronics include two humbuckers, a three-way toggle, master Tone control, and a Volume knob for each pickup. The neck knob’s location on the lower cutaway may seem like an oddity, but if you’re creating staccato volume on/off effects or smooth swells, it’s actually pretty handy.

Cranked up, the Classic AC exhibits its rockin’ heritage at any volume. Given Mr. Young’s reputation as one of the greatest rhythm guitarists, you might think this axe is primarily a rhythm machine. No question, power chords sound huge, clean, and noise-free, but the AC is also a fine lead instrument, particularly when using the neck pickup for fat creamy leads, à la Clapton and Santana.

Overall, the Classic AC is a solid piece of workmanship and a fine value. If you just wanna rock, this feisty Eastwood plank will serve you ably.