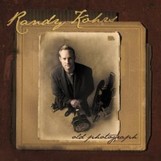 Randy Kohrs’ life story reads like a Nashville fairy tale. He came to town in 1994 and played dobro behind Hank Williams III, Tom T. Hall, Dierks Bentley, Dolly Parton, and others. Old Photograph, his second album, proves Kohrs is a musical force to be reckoned with.

Kohrs wrote or co-wrote nine of the 12 songs here, and several display his fondness for historical scenes. “Two Boys from Kentucky” uses the Civil War to frame a tale of sibling devotion, while “Rockwell’s Gold” recreates the lawless west. Both have a strong bluegrass inflection but still qualify as country due to their contemporary instrumentation and arrangements. Kohrs’ other originals also display a reverence for older musical forms, while maintaining a contemporary edge. And, he produced the entire album with no help; his arrangements combine acoustic with electric instruments to create organic textures that avoid being too slick or too funky.

Being a first-call Nashville studio player made it easy for Kohrs to lasso a bunch of other super-musicians. Scott Vestal and Scott Haas play banjo, Jim Hurst, Clay Hess, and Andrew Crawford play guitar, Tim Crouch, and Ashley Brown play fiddle, Aaron Ramsey and Jesse Cobb play mandolin, Jim Weaver and Darren Vincent play bass. With this kind of a talent, the playing on Old Photograph is top-drawer.

Do you like bluegrass, and good songwriting? If so, Old Photograph should be on your stereo about now.


This article originally appeared in VG’s Jul. ’07 issue. All copyrights are by the author and Vintage Guitar magazine. Unauthorized replication or use is strictly prohibited.