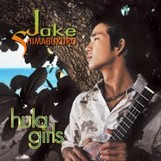 Just as he did with his incredible solo version of George Harrison’s “While
My Guitar Gently Weeps” on his 2006 CD, Gently Weeps, this 31-year-old ukulele maestro reinvents his instrument just as he reinvents the familiar songs he plays on it. His six-song EP, My Life, takes its title from another Beatles song (Lennon’s “In My Life”), and, while that cut includes bass backing, the set is mainly all Jake.

There is nothing quite as fiery as his “Gently Weeps” workout (which has become a hit on youtube), but his rendition of Led Zeppelin’s “Going To California” stirs up plenty of dust. And “Somewhere Over The Rainbow,” Sarah McLachlan’s “Ice Cream,” and the Beatles’ “Here, There And Everywhere,” and the CD’s highlight, Cyndi Lauper’s “Time After Time” (featuring understated rhythm guitar and percussion), are quite simply beautiful.

Among its bonus tracks, Gently Weeps featured two originals from the soundtrack of the movie Hula Girls. That soundtrack is now available in its entirety, illustrating another side of the Hawaiian-born phenom: Shimabukuro the composer. Here, chops aren’t front and center; in fact, one-fourth of the songs don’t even feature ukulele. Still, Jake’s keen musicality comes through loud and clear in his sense of melody and texture. “Walking Down Rainhill” has a distinct Knopfleresque/”Local Hero” feel.

And the cuts that do feature the humble four-string set this apart from other soundtracks enough to make you want to rent this film (based on the true story of a Japanese coal mining town in 1965) immediately.

This article originally appeared in VG‘s May ’08 issue. All copyrights are by the author and Vintage Guitar magazine. Unauthorized replication or use is strictly prohibited.