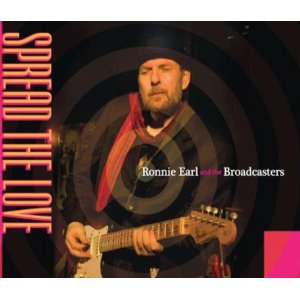 Starting like a number of instrumental albums Ronnie Earl has produced over the past 15 years, this one opens with a mid-tempo (Albert Collinspenned) track, then slows for some blues and a cool cover (“Chitlins Con Carne” by Kenny Burrell).

But then, something amazing happens; reaching deep and from the heart, Earl works through four of the most moving tunes he has ever recorded, and taps into a wellspring of soulful guitar work that is intense, emotional, and uplifting. Earl has previously displayed a talent for putting heart and soul into his playing, and here he produced the recording and wrote or co-wrote nine of the 14 cuts, most of which are melodic and lyrical even though there are no vocals – just the soaring cry and moan of Earl’s amazing Fender Strat through a Super Reverb.

His choice of covers is no less inspiring, especially an interpretation of Duke Pearson’s “Cristo Redentor,” which captures the beautiful melody in an inspired way and is a perfect choice for Earl’s style. Aided by the Hammond B-3/piano (and songwriting) of Dave Limina, Earl’s playing is a tone-tonic for the soul.