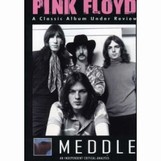 Meddle: A Classic Album Under Review analyzes this pivotal Pink Floyd record from 1971. Released two years before the mega-success of Dark Side of the Moon, Meddle was in many respects where the modern Floyd era began. It also featured the band’s first real epic, the 23-minute “Echoes.”

Along with commentary from UK rock critics and early producer Norman Smith, interesting anecdotes about the sessions abound. At the beginning of “One of These Days,” for example, you hear an electric bass playing a riff through an echo unit. That’s David Gilmour playing a crisp bass line through a vintage Binson echo. Eventually, he’s joined by Roger Waters, playing a similar bass part, though quite sloppily and with dead strings. In the brief duel, you get a symbolic glimpse of the growing Gilmour/Waters rivalry, one that would eventually implode the band in the 1980s. “One of These Days” is also noted for a torrid slide guitar solo, the first time that Gilmour really cuts loose on a Pink Floyd album.

In the end, Meddle is portrayed as a key transitional album, the “bridge” to Dark Side of the Moon and Wish You Were Here. While all the critics here acknowledge that it’s not a perfect album, it certainly deserves greater acclaim in ’70s rock lore, and this DVD does a creditable job illustrating that fact.

The Pink Floyd & Syd Barrett Story (203 mins.) tells the story of the original leader and guitarist of Pink Floyd, a young man who was the architect behind their 1967 psychedelic masterpiece, The Piper at the Gates of Dawn. In this documentary, we hear background tales of Barrett’s upbringing in Cambridge, England, and his move to London to form Floyd with Roger Waters. While the writing and recording of Piper is barely covered in the narrative, we do hear vivid recollections of British psychedelia and beyond from Waters, David Gilmour, Rick Wright, and Nick Mason. We also hear from early Floyd bandmates (like guitarist Bob Klose), managers, and girlfriends, all striving to create a picture of Barrett’s eccentric personality, rather than an analysis of his music.

The singer’s drug-induced breakdown in 1967 gradually takes center stage, along with discussion of his uneven, but influential solo albums, The Madcap Laughs (1969) and Barrett (1970). Finally, we hear the tale of Barrett’s surprise appearance at sessions for Floyd’s Wish You Were Here album in ’75. By this point, Syd was a full-blown schizophrenic, having shaved his head and eyebrows, and behaving very erratically. It was a traumatic experience for the band, leaving Roger Waters in tears, yet all the Floyd members point out the irony of his appearance during the recording of “Shine on You Crazy Diamond,” itself a tribute to Barrett’s demented, bittersweet genius.


This article originally appeared in VG‘s Dec. ’07 issue. All copyrights are by the author and Vintage Guitar magazine. Unauthorized replication or use is strictly prohibited.
Current Issue