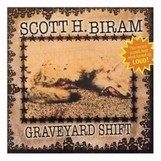 Scott Biram is one of those musicians – like Lightnin’ Hopkins with a bent toward heavy metal, or Red Simpson meets Tom Waits. Or maybe Johnny Rotten meets Conway Twitty. Get it? Well, anyway…

Most of these tracks feature Biram, his guitar, the occasional harp, and distortion so thick on the vocals it sounds like he’s found that telephone you lost 20 years ago. The music falls into the country category for the most part, with an edge – sometimes loud – that sounds like it may fall apart at any second. But never does, as Biram walks a musical cliff with skill.

Lyrically, this stuff is nasty, crude, and sometimes mean. “Plow You Under” is plain old nasty, with a metaphorical lyric for getting rid of a woman. And the nasty guitar matches the lyrics’ ferocity. “Reefer Load” is one of several trucker songs on the record, and is not for the faint of heart. And speaking of, this is not a record for the kiddies (or old folks, for that matter). The punk-country lyric and music of “Church Babies” may throw them into cardiac arrest.

If it sounds like Biram is a bit of a madman, well, that’s really not the case; he’s really a fine writer, and a glimpse at the lyric sheet offers proof. Dark at times, but always thought-provoking. And as a one-man band, he gets the job done. It’s not hard to envision him playing a bar full of cowboy hats, Harley gear, and spike-hairs, all enjoying the show. If you want something a bit different, check it out.


This article originally appeared in VG‘s Feb ’07 issue. All copyrights are by the author and Vintage Guitar magazine. Unauthorized replication or use is strictly prohibited.