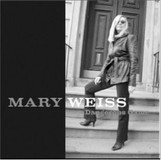 “I always knew I would record again someday,” Weiss writes in the liner notes. But who knew it would take 40 years?

In the mid ’60s, Weiss was lead singer of the Shangri-Las – quite possibly the baddest bad girls of the “girl group” era (sort of the white Ronettes). With hits like “Remember (Walking In The Sand),” “Give Him A Great Big Kiss,” “I Can Never Go Home Anymore,” and of course “Leader Of The Pack,” they were the embodiment of hormone-fueled teenage angst.

Probably owing to the over-the-top drama (complete with motorcycles revving) of the material, they’ve never received the critical respect they deserve. Weiss in particular ranks as one of rock’s true stylists – a major influence on singers like Patti Smith and Joey Ramone.

Brought out of retirement by Norton Records (the same folks who released Question Mark & The Mysterians’ phenomenal comeback CD), and backed by Reigning Sound, Weiss sounds as good as ever. Almost inexplicably, five words into the opening “My Heart Is Beating,” it’s clear that her voice is virtually unchanged (maybe a little deeper, more resonant).

Thanks to Reigning guitarist Greg Cartwright, who co-produced the CD with Norton’s Billy Miller and wrote nine of the 14 songs, the album is true to Weiss’ style but sounds absolutely up-to-date. This is not a trip down Memory Lane. Which is not to say some ’60s staples aren’t employed. There’s plenty of tambourine, and when’s the last time you heard this many castanets?

Cartwright’s “Break It One More Time” (as in “my heart”) could sit unobtrusively on the flipside of any Shangri-Las’ hit or the next Patti Smith record, while “Don’t Come Back” recalls the Ramones’ flirtation with Phil Spector. The bossa-nova title song, however, sounds like a missing Dionne Warwick classic.

He provides rhythm and texture throughout, and steps forward to solo in brief bursts to further the song, rather than exercise his ego. The focus is always on the song and, most important, Weiss’ voice. That instantly recognizable voice.