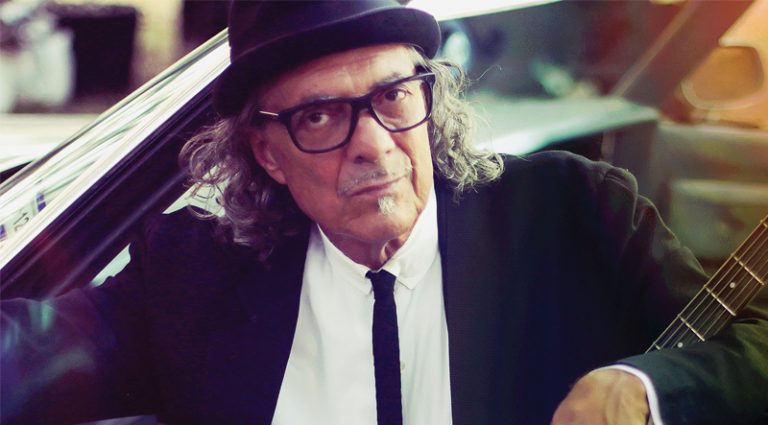 Considering the varied musicality of Austin, Texas, it’s no wonder singer/songwriter Johnny Nicholas makes his home in the Texas capitol.

When he began playing, Nicholas was abetted by notable bandmates.

“Duke Robillard and I grew up together in Westerly,” he said. “He and I used to get together after school and we played shows with his band, the Variations, and mine, the Vikings. In 1970, we formed a band called Black Cat with Steve Nardella, Fran Christina, and Larry Peduzzi. It lasted about nine months before Steve, Frannie, and I moved to Ann Arbor, Michigan, while Duke reactivated Roomful of Blues with a horn section.”

“My favorite blues genre would be Delta artists who transitioned to Chicago – Howlin’ Wolf, Johnny Shines, Eddie Taylor, Big Walter Horton, and Roosevelt Sykes come to mind,” he said. “I love B.B. King and all the great, more-modern guys, but not like I love country blues.”

After playing with Asleep at the Wheel for several years, Nicholas settled into Austin with his family in the early ’80s. His most recent album, Fresh Air, includes unique instruments including an electric from the ’60s.

“It’s an Axis Cypher,” he said. “Most people think they were a Teisco spinoff, but I believe it’s an Italian-Japanese collaboration; Intermark made the neck in Japan, the electronics are definitely Italian.”

Nicholas and associates used a lot of classic instruments on the album.

“Scrappy Jud Newcomb played my 1915 Style A Gibson mandolin, his little Harmony mando, and my 1914 Gibson mandocello. I used a Danelectro baritone in B natural but capo’ed on the first fret, so we were playing in C.”

Resonator and steel-guitar parts are courtesy of Cindy Cashdollar, except the solos on “Backdoor Man,” and the original material involves a lot of personal reflection and memories; “Play Me Like You Play Your Guitar” and “How Do You Follow A Broken Heart” offer plaintive lyrics. “Backdoor Man” is one of two traditional blues songs, and the other – Sleepy John Estes’ “Kid Man Blues” – serves up a Bo Diddley/semi-funk/quasi-reggae beat with solos that involve steel guitar interplay with bass, guitar, and mandolin.

“I heard Sleepy John do that at Newport when I was a kid, and always loved the song.” Nicholas recounted. “The bass part is my ’59 Dano Longhorn baritone.”

Nicholas is “mostly satisfied” with Fresh Air, “Which is saying something because I’m critical of my own stuff. The band is stellar, production is stellar, and while I dig my tunes, I’m restless to get on to the next group of songs and stories. I also want to hone my stage skills and keep challenging people to think for themselves, open their hearts and minds.”