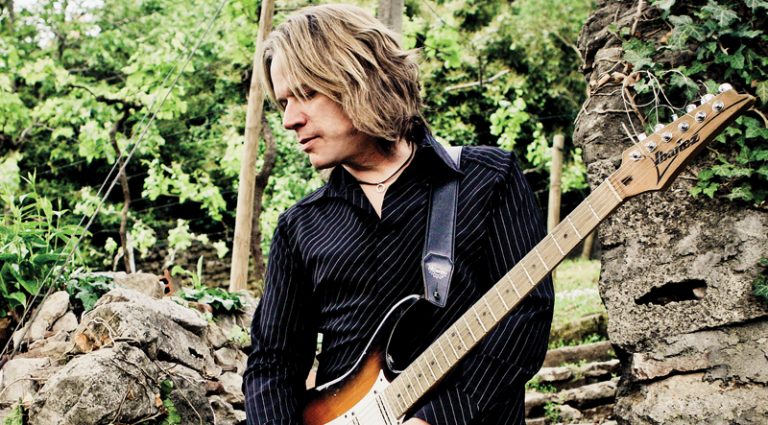 After a decade pushing his craft to new creative realms, Dallas-based guitarist Andy Timmons is once again purveying original instrumental guitar rock. His 2006 album, Resolution, was his band’s last in that style, and the ensuing 10 years saw him record fusion albums with drummer Simon Phillips along with an acclaimed instrumental version of Sgt. Pepper’s Lonely Hearts Club Band. His new effort is Theme from a Perfect World.

“It’s hard to believe it’s been 10 years,” Timmons recently told VG. “I’m never really out of the instrumental songwriting mode, it just took a while to get back to the studio.”

Timmons used a plethora of vintage instruments on the album, and likened selecting them to trying different vocalists.

“The main guitar is essentially singing the melody, and we had a great time auditioning ‘singers’ for each song. We tried different guitars until we found one that best suited each song,” he said. “A lot of the songs were written on my ’94 AT100 prototype from Ibanez, so that guitar is on several songs.”

Theme from a Perfect World doesn’t contain jamming or show-offy guitar races, but all have a complete feel, implying they were written “all the way through,” but with allowance for improvising.

“There wasn’t a conscious move in that direction,” Timmons averred. “It just seems the songs were the focus, and if the arrangement didn’t require a solo then that’s the direction we went. Early in my career, I may have been more concerned about demonstrating my abilities on the instrument, but I’ve always been equally aware of the necessity of a good song first and foremost. Now, I’m most interested in presenting the song in the best way possible regardless of the guitar prowess utilized in the process.”

While there are plenty of powerhouse riffs on the album, several tracks open with ethereal passages before cranking up. Of particular note is “Sanctuary,” which has an intro that almost sounds like a new-age piano.

“That’s one of my favorite tones on the record!” said Timmons. “That’s my white AT100 signature guitar with the Wilkinson bridge set up to float slightly; I’m normally an “on the deck” guy, running through two Mesa Boogie Lone Star 1×12 combo amps split in stereo via a Strymon Timeline delay. I’m also hitting the front end of the amp with my signature Carl Martin compressor, mainly using it as a significant boost without much compression. There’s no reverb, just the lovely delay with a bit of modulation on the repeats.”

“The main chordal theme of the song – I guess you could call it the chorus – is completely inspired by all things Todd Rundgren. His sense of chord work and melody has always intrigued and inspired me. I also imagined this chord sequence in the chorus as something like ‘Court Of The Crimson King’ and originally thought we might employ a Mellotron to beef-up the sound, as on the King Crimson classic, but a Hammond B3 ended up winning that role. The arrangement – and title – is very much inspired by ‘Utopia Theme’ from the first Utopia record. It’s like Mahavishnu goes pop! It took us a while to find the right tone for the song but it’s mainly a Gibson Pete Townsend SG Special with .012s, except for the second verse melody, which is the ’65 Strat.”

Timmons was asked about the passage on the album in which he takes the most pride in having created.

“That would have to be the solo and bridge of ‘Winterland’,” he said. “It has a nice energy, is very melodic and leads into the bridge, which has a great, emotional feel to it.”

The guitarist also plans on continuing to write and record guitar music.

“That’s something I really appreciate about instrumental music,” he reflected. “Listeners are free to attach their own meaning or feeling to it.”

And it won’t be another decade before the Andy Timmons Band releases another instrumental album.

“I am always documenting song ideas and filing them away for later,” Timmons said. “My intention is to massively trim down my outside musical projects and focus entirely on my own music.”

Farewell to a Venture