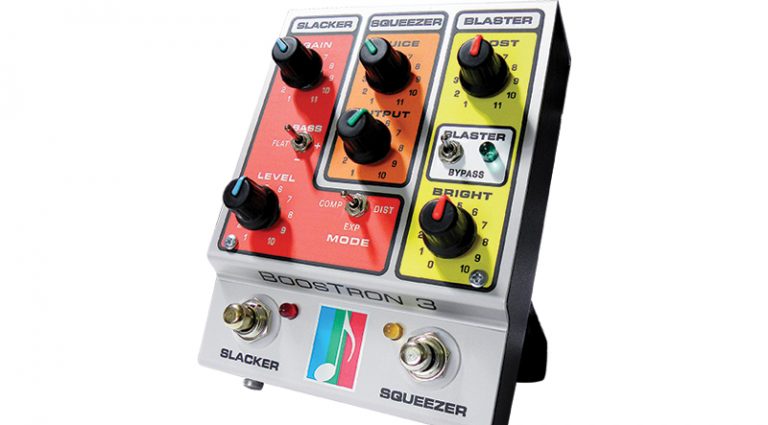 Leave it to Mike Beigel to create a masterpiece of a stompbox… again.

The Mu-FX Boostron 3 is three pedals in one. But it’s also so much more.

Sure, you can buy: all-in-one multi-effects pedals or digital microprocessor “magic boxes” with hundreds of modeled voices. Be prepared, though. Their complexity often causes your head to spin while the programming functions wear out your fingertips. And they usually do too much – while not doing any of it quite right.

Beigel’s Boostron 3 is carefully thought out to be the nexus of your pedal array. And you may just find it’s all you really need.

To back up a minute, in case you weren’t paying attention in guitar school, circa 1972, Mr. Beigel was one of the brains behind Musitronics Corporation. He was the creator of the famed Mu-tron II, the brilliant funk-in-a-box pedal that showed the world we needed an envelope filter when we didn’t even know what one was. He followed that with the Mu-tron Octave Divider and Bi-Phase, all beloved and glamorously expensive today.

By ’78, however, Musitronics was history. In 2012, Beigel sparked Mu-FX to build new and improved versions of his classics that still boasted the same DNA and musical mojo. The Boostron 3 is his latest, with assistance from musician and computer scientist Rand Anderson. And it’s unique in not being based on a vintage Mu-tron effect. Well, at least that’s mostly true.

The Boostron 3 shares the handsome good looks of old Mu-tron pedals: a distinctly ’70s, first-man-on-the-moon fashion sense combined with a vast range of knobs, switches, and controls that make you feel like you’re driving that spaceship.

The box combines three gain stages, each based on a vintage effect, and they do a great job of playing well together.

The first gain stage is a boost based on the ’70s Alembic Stratoblaster. Ring a bell? It was a preamp that you installed in your Strat to give the single-coils some needed oomph on the low and high ends. Here, it’s controlled by a toggle switch. The boost is so good, you won’t be blamed for leaving it on all the time.

Stage 2 is based on the Dan Armstrong Orange Squeezer compressor, a classic guitar-mounted mini unit that was conceived and built by Musitronics in 1976-78 – hence the promised connection to the Mutron legacy. If you don’t know this famous compression circuit by name, just think of the sound of Dire Straits, Steely Dan, and the Doobie Brother.

The final stage provides distortion à la the old Pro Co RAT LM308 op-amp pedal, which made its underground debut in ’78 before becoming hot stuff in the 1980s. The distortion ranges from the mellow blues tone of a Tube Screamer to a more distinct, sharp-toothed clip and on to no-holds-barred, full-throttle, all-out fuzz.

There’s more. While these three stages provide most of what you need most of the time, Beigel planned the unit to also play well with others, incorporating an FX Send jack that allows you to plug in an effects loop. Differing from an amp’s effects loop, this is ideal for vintage effects that could use the helping hand up of a little boost. Plus, the return is wired into the circuit before the compressor stage, so you can tame any unruly, hot-sounding vintage box.

Finally, the Mu-FX is handmade in the USA. And it’s rock-solid, high-quality, and ready for decades of music-making.